And there’s only one Raphinha.

Raphinha didn’t score, Raphinha didn’t assist. His pass completion was the worst of the Peacocks, and statistically — absurdly — none of his five attempted dribbles were ‘successful’.

I guess it depends what you mean by success. 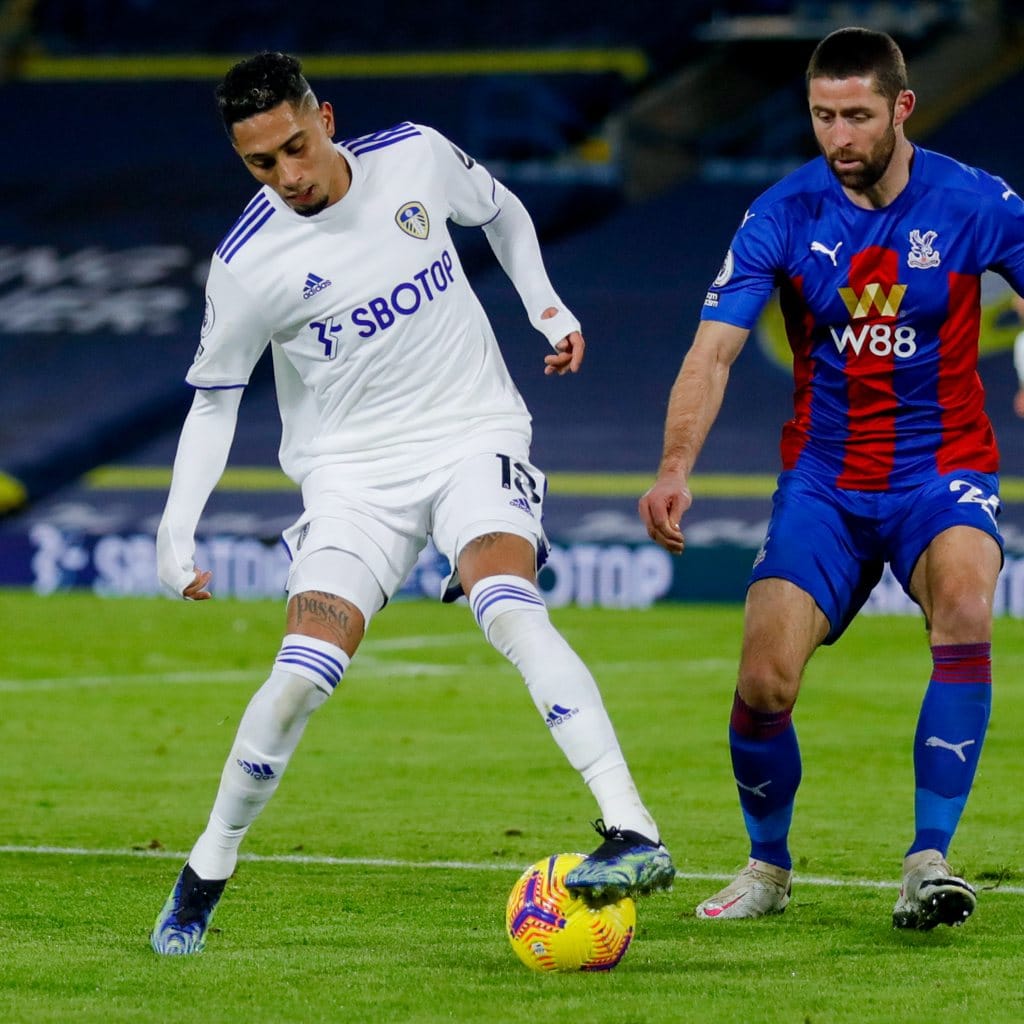 One of Raphinha’s failed attempts included a pirouetting backheel through the tree-trunk legs of Gary Cahill, whose next thoughts at least matched his body’s pace, triggering his ‘foul, foul, foul’ reflex. He dragged Raphinha down just outside the penalty area. The free-kick was bounced off the top of Pascal Struijk’s bonce so nothing, in the end, was gained. But that’s more down to the ultimate pointlessness of existence and Struijk’s heading ability than to Raphinha.

When a piece of skill is being replayed around the world, watched more than a million times just on Jermaine Beckford’s video of his television screen and his feet and his exclamation; when videos of people’s reaction to watching a piece of skill are going viral; when more words are being written about a piece of skill than about the goals that won the game; when kids are heading into back gardens with a ball, determined to copy a piece of skill and ‘end forever’ their younger siblings; then might the statisticians be persuaded to go back to their spreadsheet, delete that zero from the column, and agree that yeah, alright, maybe that one counts as a success?

It’s the clips that are establishing Raphinha’s reputation on the world stage and generating the rumours about big money transfers to Liverpool or worse. One day saying goodbye might be our sad fate, but until then Leeds fans can enjoy a deeper love than the clips and the wow factor allow others.

This spinning nutmeg backheel, first. Why did he do it? I imagine Gary Cahill woke up next morning asking the same thing. Although it came to nothing it wasn’t done without reason. Leeds players aim for a spot on the byline from where they can cut the ball back to the umpteen teammates surging into the penalty area, and that’s where Raphinha was headed. Cahill’s reputation just happened to be in the way.

Raphinha’s hard-headed urge to attack is hidden by the clips giving his skill the close-ups but disguising his determination, as if he is feet without a face. But look at his eyes, in particular after Bamford finished the rebound when Raphinha’s shot was saved. While Bamford was celebrating a career milestone 100th goal, and the team was welcoming a comfortable lead in the game, Raphinha was cursing the goalkeeper for denying his goal.

Football flits awkwardly between the expressions of the individual and the team, and Raphinha exists in that liminal space. His face after the defeat to Everton showed suppressed fury, and that was about the collective defeat, not a personal failing. One of his best moments against Palace was in the 90th minute when, frustrated that his team were running the clock down at the back, he ran sixty yards to intercept their match-managing passes and launch an attack. Leeds had the win sewn up, but he still wanted his goal. Another feature not included in the clips is his defending: with eighteen pressing actions, he notched more than Mateusz Klich, Stuart Dallas or Jackie Harrison, with a better success rate too; he didn’t want his goal for nothing. He’d earned it by his work for the team.

This is where comparisons to Eric Cantona do Raphinha a disservice. Cantona’s defiant individualism meant moments of great skill and some excellent goals after he arrived from Ligue 1, or more accurately, from his petulant early retirement. But it also made him a liability in a team built on collective effort. At his best for Leeds Cantona came close to Raphinha; at his worst he was like if Alioski had an attitude problem. The fans were bemused when he was sold to Old Trafford, but you’d struggle to find a Leeds player who was sad to see him go.

But then, why on earth did Rennes sell Raphinha to us? In this year of all years? Their Champions League campaign has been a disaster, collecting just one point from a draw with Krasnodar, but in Ligue 1 they’re 5th and doing fine, if a long way from the leaders. But in the miserable grind of this plague year, they can’t be having much fun without Raphinha. He still leads their squad’s stats for attempted and successful dribbles per ninety minutes and is way, way out in front for nutmegs. And although the sample size from the start of the French season is small — four-and-a-half games — his stats were a smooth continuation of last season’s 22 games: six attempted dribbles per ninety, half of them successful, and 0.43 nutmegs per match. No wonder their fans were cross.

They might be even more infuriated by his stats so far at Leeds, where he is yet to replicate that form in the Premier League. Attempted dribbles are down from 5.85 per ninety last season to 3.86; success has dropped from 52.7% to 44.4%. Worst of all are ‘megs per ninety, now a mere 0.14. Leeds have stolen him, fallen in love with him, built bonfires to him as if worshipping a new star. And we’re not even seeing all the flair yet that Rennes’ fans once loved.

But then he doesn’t come up against Gary Cahill every week in the Premier League, or a team as generally lousy as Crystal Palace. We had to bless Raphinha after this one because without him the game was Premier League beige. Obviously this wasn’t down to Leeds, who were their usual paradigm-shifting revolutionary selves, transforming the meaning of the sport with every etc etc yadda yadda. But playing Palace was like arguing with the idiot from the aphorism, who drags you down to their level and beats you with experience. It doesn’t seem to have occurred to anyone at Palace that a team with the attacking talents of Ayew, Mateta, Eze, Benteke, Batshuayi, Townsend, and when he’s fit Zaha, might need some defenders or midfielders who can give those players the ball, instead of booting it all the time to the other team.

Jackie Harrison’s opener, after three minutes, came when Klich and Dallas kept Palace’s clearance in their final third, and Harrison searched in vain for someone to stop him waltzing into the penalty area and shooting into the top of the net. The second came after Roy Hodgson’s half-time reboot but before it had any discernible effect, and besides, it was just the same thing again: Phillips kept Palace’s clearance in their half, Klich slipped a pass to Raphinha, and when a strong hand stopped his shot, Bamford was there to tuck in the finish. Harrison almost made it three at the end when Nathaniel Clyne laid the ball off to him on the edge of his own area, but the shot pinged off the top of the bar.

There were other nearly moments for Leeds, particularly from Struijk’s tries at attacking headers, and it was a shame: Palace deserved to go home embarrassed about this one, whereas it’s Leeds who must be pink-cheeked for letting such a tawdry bunch beat them 4-1 in November. The Premier League’s marketers must shudder when all their hype and rhetoric is rewarded with a show this insipid on their valuable international feeds. I’m not in favour of super leagues being constructed for the benefit of the top six and their fragile bottom lines, but I could be persuaded into a redefinition of elite football that excludes Scott Dann and whatever is left of Gary Cahill.

And I’m quite content with the style and effect of Leeds United’s ascent, clambering up the Premier League as if they’re carrying a symphony up a pile of trash. ◉