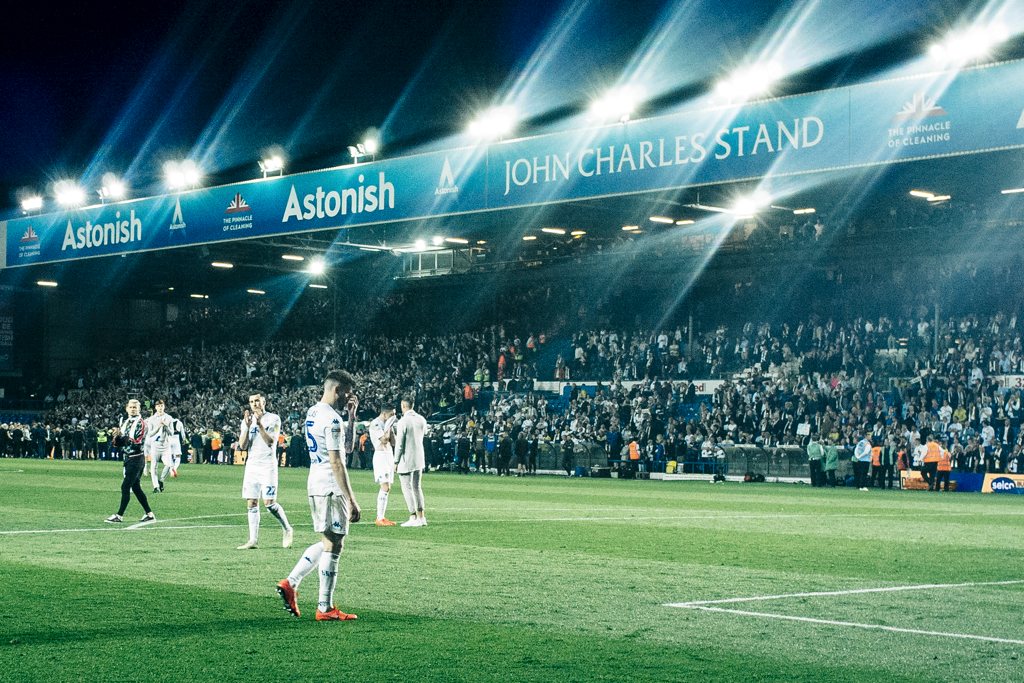 Football’s paradox is that being good can hurt as much as being bad. A league season is 46, or 48, or 49 chances to fail, and nobody can withstand that sort of punishment. Manchester City have one of the best teams club football has ever seen: this season they lost to Chelsea, Crystal Palace, Leicester City and Newcastle United.

No matter how good your team is, defeat stalks you game by game until it has you in its jaws. Then it releases you so the game can begin again. Sometimes you’re bitten so regularly you become immune; when you’ve got a bad team, they can only hurt you so much by the end of the season. Sometimes, when your team is good, you go so long without losing, and come so close to football’s rewards, that you believe you’ve outrun the terrors once and for all, and forget that the start of every ninety minutes is only the start of another attempt at avoiding hurt. That’s when failure bites you again, right in your optimism, with a sabre tooth through the consequences.

Marcelo Bielsa knows all this, feeling it more intensely than any other coach, and in that sense he’s the perfect coach to fail with. He once said that, after you win a match, “There is a sensation of effervescence, a sensation of the adrenalin to the top, the generous excitation and happiness. But those are only five minutes, and after that there is that enormous and huge emptiness, and an indescribable loneliness,” the same emptiness and loneliness you feel after a defeat. Football, to Bielsa, is a permanent state of painful defeat, occasionally reduced briefly by wins that are only a prelude to another defeat. He may have had that in mind as he stood in his technical area at the end of the game last night, waiting for Derby County’s celebrations to die down so he could shake Frank Lampard’s hand. It was Derby’s night. But they still have to go to Wembley.

All this makes Bielsa the perfect coach for Leeds, a club that embodied his philosophy for years before he came to Yorkshire. In five seasons at the end of the 1960s Leeds won more and lost fewer games than any other First Division team, but Manchester United won more league titles. On a Saturday in 1972 Leeds won the FA Cup; on Monday they lost to Wolverhampton Wanderers and lost the league title. In 1987 John Sheridan scored one of the most gorgeous free-kicks ever taken to give Leeds the advantage against Charlton Athletic in extra-time in the play-off final, but then Peter Shirtliff scored twice and Charlton won. Long ago, before I knew about Bielsa and his philosophy of defeat, I wrote that Sheridan’s free-kick is beautiful the way autumn is beautiful, when all the leaves turn golden brown and fall to the forest floor, because they’re dying. Perhaps I was waiting for Bielsa to come along and show me why that was true.

Ah, the play-offs. What can I tell you about the play-off semi-final game last night? I can tell you that I was there, but this morning I had to open a browser tab and use Google to check what the score was. 4-2? Really? Did I really see six goals last night? And two red cards? All this happened in ninety minutes at Elland Road?

Three of Derby’s goals happened in thirteen minutes, and the game never recovered itself from that chaos. United’s collapse was so rapid and unexpected the stadium was in shock. Pontus Jansson, a substitute warming up, marched onto the pitch after Derby’s third, yelling at his teammates to get a grip of themselves. There was time, and Derby looked as likely to succumb to the carnage as Leeds, and Stuart Dallas forced them to concede an equaliser on aggregate. But amid the mayhem, Derby put the ball in the net again and Leeds didn’t. That’s all it took to ruin everything.

It’s difficult to report effectively on a game like this in the social media era, because you’re reading this on the internet, probably after following a link on Twitter, and that means you’ve almost certainly seen all the harrowing clips you need to see, even if you didn’t watch the game live at the stadium or on television. You’ve seen Kiko Casilla, a sweeper keeper in style but not in execution, for whom no starting position seems to be far enough upfield for him to be able to clear a high ball effectively; moments after he left a ball to Cooper and Jack Marriott scored for Derby, he repeated the act with Kalvin Phillips and nearly let Derby score again. You’ve seen Derby cut through the middle of Leeds and really score again forty seconds into the second half. You’ve compared the penalty Bennett got for Derby with the one Bamford didn’t get for Leeds. You’ve seen Gaetano Berardi scrambling between kicks to keep the ball, then kicking and leaving beneath a second yellow card. Seen Marriott score the last goal. Seen Frank Lampard’s celebrations reduce a lifetime of privilege and riches to the state of a drunk bank clerk running amok at a racecourse.

And it’s difficult to write about it because the result means there’s no context. That was it. The end, of something. All possibilities of redemption are deferred until August. There’s no point writing that Casilla can work on communicating with his defenders because he isn’t training today and won’t be training for six weeks. There’s nothing to gain from criticising Pat Bamford’s failure to trouble Derby’s defenders because who knows how much was due to two serious knee injuries this season, or whether he’ll be United’s main striker next season. Should we withhold comment on Pablo Hernandez’s failure to lead the team through its toughest moments of the season until we know if he’ll put himself through another season of Championship football? How much praise can we give to Stuart Dallas for putting all his determination into providing the gritty leadership Hernandez wasn’t, if he’ll be back to being a reserve utility next season? What can we say about Jamie Shackleton’s superb performance? When all it leaves us with is regret that he didn’t play more in the past, and all it gives us is hope for his future, and ours, which is what ended up hurting us so much in the first place.

My analysis of the football match, in the end, is simple: if Kemar Roofe had been fit to start Leeds would be going to Wembley. Derby’s defenders have hated playing against him this season, because he’s given them problems that Bamford didn’t. Good defending starts from the front; if Leeds had been better in attack, there’d have been less pressure in defence. This isn’t to blame Bamford; it’s to blame the fates for spinning one more thread upon this season’s gaudy tapestry of blood and injuries.

Analysis of everything else depends on Marcelo Bielsa’s decision about the club’s offer to continue coaching the team next season, but I can’t offer much there that isn’t hollow. Over the last nine months we’ve become used to Bielsa’s press conferences as a source of reassurance and direction; we knew the team, we knew who was injured, we knew his thoughts on winning, losing, tactics, ethics. But Bielsa only speaks when he’s mandated, so even if he decides to stay — and we must pray to those same fates and deities that always scorn us that he will — we face more months like last summer when, after an introductory press conference, he worked in mystifying silence through pre-season, while the fans tried to connect the dots between transfer rumours and bewildering lineups in friendly matches. Perhaps Bielsa will think the decision on his future is significant enough to allow the press to question him; perhaps the summer tour to Australia will include some contractual obligations to speak. Otherwise, we’re looking for a white puff of smoke above Elland Road and a whispered, ‘Bueno’, and then months without Bielsa, even if he’s still with us.

That’s the impact I’m feeling most from last night’s game: a sense of sudden destabilising loss and futility. At 8.25pm last night this season was supposed to last for eleven more days, until after a match against Aston Villa at Wembley; in a bit more than an hour that was all destroyed, and now there’s nothing. Whatever was planned for the next week is cancelled. The training pitches will be mowed to Bielsa’s specifications but nobody will be playing on them. The kitchen staff have no menus to cook, the coaches have no sessions to plan. The fans have a free scarf, a video of last night’s game, and hotel rooms to cancel.

They have their memories of the season, too, Leeds United’s best season for almost a decade. But as Bielsa said, “those are only five minutes, and after that there is that enormous and huge emptiness, and an indescribable loneliness.” Perhaps the feelings will balance out after a while, and the good memories of what happened this season will overwhelm the pain of how it ended; we’ll celebrate the life rather than mourning the death. But the defeat will never entirely leave us. Because it’s football, and no matter how good you are, it never does. I wonder if that’s why we like it. ◉

(If you enjoy these reports, are you reading the BUFF? A daily email newsletter by Moscowhite for twenty pence a week. Help support independent writing: Click here to get your daily BUFF.)