One effect of living during this pandemic has felt like a veil being pulled over the future. For most of the past year there’s been no knowing how long the crisis might last, if it will ever end, what life will be like afterwards, or when afterwards might begin.

With the future closed, we have two routes: the present, but that’s where the coronavirus is so not that, or the past.

Which is perfect for football fans. History is our playground. The game is obsessed by its past, and when last season was suspended, we were immediately ushered into our happy place bunkers by broadcasters who had just the thing to meet the moment: Viduka 4-3 Liverpool repeating into bliss. 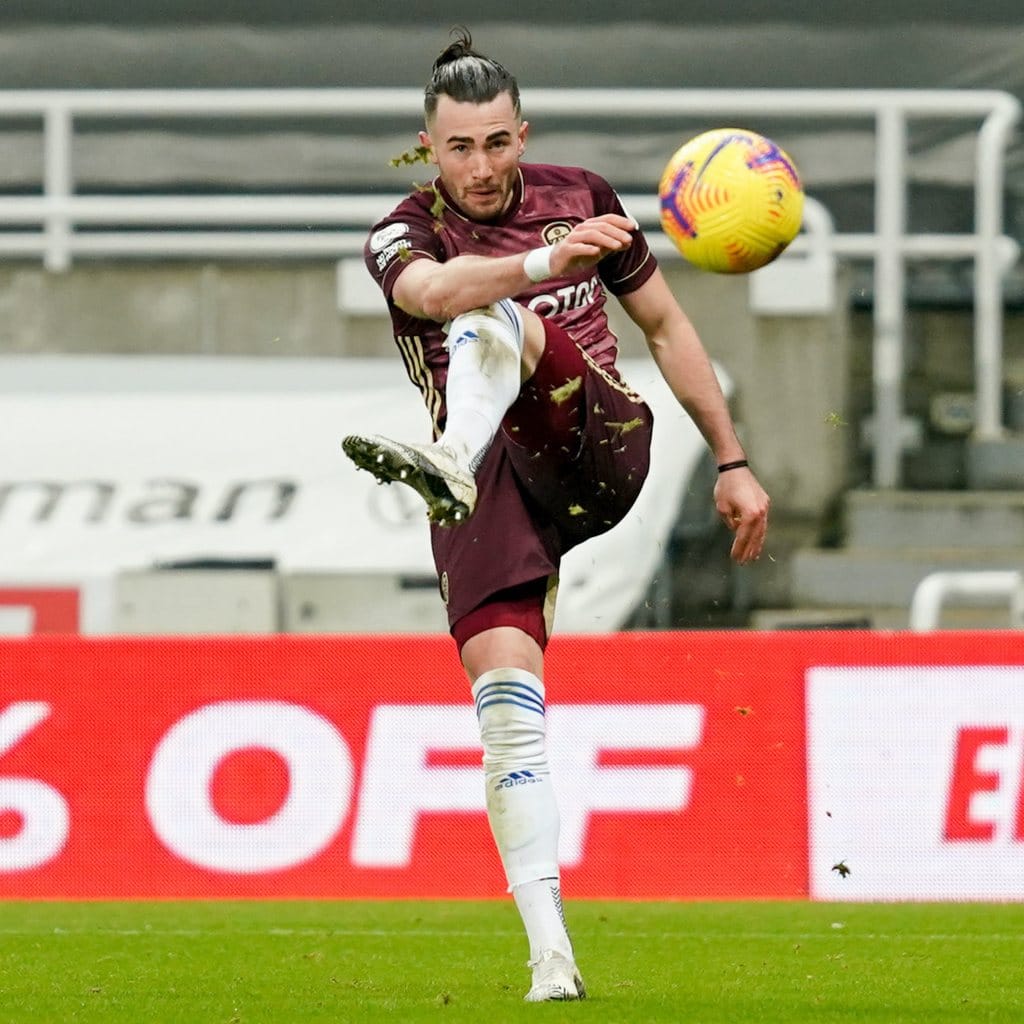 In most sane conversation, saying something like, this week’s win at Newcastle was only Leeds United’s thirteenth since their first in January 1933, would be adding irrelevant nonsense. But in the bizarre discourse of football, linking the team of Liam Cooper and Stuart Dallas to that of Ernie Hart and Willis Edwards is a completely normal thing to do. Arthur Hydes scored a hat-trick that day in 1933. So we look at Pat Bamford and expect.

We define ourselves and our club by linking last night to the two other times when the Peacocks won 2-1 at the home of the Magpies: April 1995, when Gary McAllister, Robbie Elliott then Tony Yeboah did all the scoring in six first-half minutes, and April 1958, when George O’Brien and Hugh Baird cancelled out George Mitchell’s goal for the home team.

Is it important that both those games were played in April? No. But the patterns sustain us, especially now, while we’re drifting. Nostalgia has never been so useful. If we still have those foundations we can still imagine a time when we will have a future. Under normal circumstances, that hope from history is used to sell season tickets. During the pandemic it feels existential.

It’s also how punditry moves so easily to discussing Bielsa burnout or Leeds playing poorly in winter. The future is difficult but the past is on Wikipedia, and given the safest bet is always on inertia, it’s natural to suggest that what happened before can happen again. The past is where pundits come from — Alan Shearer, for example, played his first game in 1988 — and it’s where they’d rather be, back before their playing careers ended. Every conversation is about games that have already been played.

Marcelo Bielsa, while dealing with the press, tends not to sound angry, just disappointed. “I want to know,” he asked a reporter this week, “If the response I gave you, whether you think it is sufficient in this sense?” The reporter had asked why Leeds always get bad results in January. Bielsa had given the reason as, “Nothing in particular,” and wanted to know if that was clear.

Which was not denying the pattern. You can’t, really: last season, two wins in twelve, including the FA Cup exit; the season before that, two wins in eight. The season before that included just one win in fifteen, stretching into spring and costing Thomas Christiansen his job, but that’s the point when Bielsa can start asking, what has any of that got to do with him?

Unfortunately for Bielsa, it’s not that easy. When you assume control of a club, you’re expected to assume control of its history, too. Before this game, Leeds hadn’t won at St James’ Park since September 2002, and nobody drew back from mentioning that merely because it’s history, even preceding the birth of Leeds’ reserve defender Charlie Cresswell. Alan Shearer played that day and is very much part of our present; it remained a game to be reckoned with, even if Bielsa was managing Argentina to a 2-0 win over Japan at the time.

For a while at St James’ Park it looked like history was repeating from that Christiansen winter in the worst way. Mateusz Klich was cast out, and post-match accusations were thrown around social media that Rodrigo, Leeds United’s talented but diffident playmaker from Spain, had spat at Newcastle’s Fabian Schär; an echo from Newport, where Samu Saiz, Leeds United’s talented but diffident playmaker from Spain, etc etc and so on. Rodrigo had not; but somehow, that Saiz had gave the allegation more weight. Football is never more than a low resolution replay away from sighing, ah shit, here we go again.

The match did feel like a journey into the past but to Brentford, not Newport. Jackie Harrison said Bielsa’s pre-match talk was about personality and character, about improving in adversity, having grit and fight; the same approach that got Leeds out of their gloomy rut last February. That horrible run ended at Griffin Park not with a flicked switch return to best form, but with a clumsy giveaway goal, a scrambled equaliser, and a lot of effort into maintaining standards, a team clambering out of a hole before our eyes.

Adversity didn’t easily let go of Leeds at St James’ Park, either. The teamsheet was a calm document, with Illan Meslier back in goal, two experienced centre-backs and a right-back in their proper places, and out-of-form Klich replaced by always-in-form Dallas. That was all torn up after eight minutes when Diego Llorente limped off, bitterly upset, back to the treatment room confining his season. At least Leeds could keep Luke Ayling at right-back, while we’re learning a lot more about Pascal Struijk this season than we otherwise might.

The attack was better, and only took quarter of an hour to gain the lead. Pat Bamford ran through on the counter and passed wide for Rodrigo, who pulled the ball back so Raphinha could shoot in low.

It was that easy, and that was too easy, and Leeds played as if confounded by Newcastle’s badness. Rodrigo should have made it two just before half-time when he was put into their six-yard box, but when he span onto his left foot, he seemed to think the unguarded expanse of net Karl Darlow was offering him was a trick. He hesitated and lost the chance, and Leeds’ disbelief in their opponent’s chronic failures cost them a commanding lead.

Newcastle manager Steve Bruce could only believe in set-pieces, and he was the one person forcing himself to live in the present, every free-kick chance requiring an act of faith obliterating the memory of the last one, blasted over the bar, or the one before, blasted over the bar. But just as Brentford were given a goal last year when Leeds needed it least, here Bamford obliged Newcastle. His stray pass, meant for Ayling, let the Magpies rush in, too close to goal and with the Leeds defence too caught out to stop Callum Wilson’s one-two through for Miguel Almirón to score.

The pattern of the rest of the game with Newcastle was familiar, too, but more like grounds for divorce. Allan Saint-Maximin had one job as substitute, sprinting with the ball at Leeds’ fearfully backpeddling defenders; Jamaal Lascelles had one job at corners, of heading them at the goal. They did their jobs very well so, like last year at Brentford, the Peacocks’ change of fortune came as relief, not ecstasy.

If fortunes have changed, that is. Drawing at Brentford last year was the prelude to five wins without conceding a goal. Now, Leeds play Leicester next, then Everton, Crystal Palace, Arsenal and Wolves. Winning all five 9-0 on aggregate would mean witch trials across Beeston. But a decent return of points and a big jump to Premier League safety would justify the equivalence.

But only to a point, in Bielsa’s view. He doesn’t deny there are patterns in football. But, he told that reporter this week, “It’s not important just to find similar situations, but to include why they happen.” Analysing our winters, Bielsa, “Cannot see anything that has happened repeatedly” to explain the pattern. The results might be the same, but the underlying reason in common is “nothing in particular.” Our bad winters are as relevant as our London curse: it’s true that Leeds can’t win in the capital, but as Bielsa pointed out last year, that doesn’t mean we’d win the same games if we played them in Birmingham.

Despite the irrationality, fans still crave our comfort in the past, rushing quickly to Saiz or Brentford or 1933; because, from those perspectives, we can see futures when for a while things were eventually okay, unlike the present, when for a long time we’ve not even been able to rely on hope.

And then, just when Bielsa is diverting us from the chaotic imprecision of history, the players stick an old Bielsa favourite on the jukebox and bring all the good times back. The ball is in our corner and now it’s in their net, and that’s a nostalgic tune Bielsa should be asked about. There might be nothing reiterating in our bad times that Bielsa can use to explain them. But ask him how the bad times get good. There we can see a pattern, and it’s something he made, a cause for hope in the past. ◉