You only have to mention Pontus Jansson in connection with either an injury or a transfer rumour for armchair students of body language and psychology to start offering theories about his current state of mind. And there’s nothing necessarily wrong with that; we all watch football, but we don’t only watch the feet and the ball. The question is, what do people see, and why?

This week, with Pontus, we had both flavours: first the injury, a back or muscle strain that kept him out of the match at Swansea City; and a story from Sweden, claiming Leeds had accepted a bid of around £5 million for him from Krasnodar in Russia, but Jansson had declined to move. Phil Hay offered an alternative story; Krasnodar had bid close to £10 million, but Leeds United had turned it down.

One or the other, the injury or the transfer rumour, would have been enough. The Sale of Pontus is up there with The Tragedy of Pontius Pilate as a matter that will take its course whatever we may wish otherwise; one day, it is believed, Jansson will wash his hands of us and move to the Premier League — presumably English, but perhaps now Russian — the way Pontius Pilate washed his hands as Jesus was led away to be crucified. Jansson’s transfer perhaps won’t be that dramatic, but I’ve read some chilling stories about sports science in Russia.

Either way, the feeling is it’s going to happen whether we like it or not, and until it does, every whisper of interest will be analysed and argued about. Is the fee enough? Can we sign a replacement? Does Marcelo Bielsa even want him? How long ago did his heart leave, anyway? Is this the real reason why he didn’t play at Swansea — the Malmo thing is just a front, and he’s miserable at being denied his boyhood dream of playing for Krasnodar?

The Mysterious Absences of Pontus are almost as worthy of capitals as his Transfer Tragedy. Jansson is a rare player in that he can never be injured, despite arriving from Torino with a fragile knee; there’s always something more to it. There are Leeds fans who will go to their graves refusing to believe Jansson was concussed against Preston last season, just as Bielsa will go to his begging forgiveness from Hernan Crespo. His latest minor injury was quickly dismissed, too; if Jansson had a back injury, it was said, it was obviously the hump. He was seen scowling. He didn’t do the fist pump thing after a game. He’s livid about not playing ahead of Gaetano Berardi. Now there’s a transfer involved. If he doesn’t start at Norwich City, no doubt his face will turn as pink as the away dressing room walls, then purple as he finds himself arm wrestling Salim Lamrani in a rage (Pontus, I would strongly advise taking an actual gun if you’re starting that gunfight).

Or not. Because the way all this innuendo circulates around Jansson seems bizarre, when his situation — and the mood on his face — is generally easy to read. He’s not in the first team at the moment because he only returned from the World Cup on the eve of the league season, his one appearance in the League Cup demonstrated a lack of fitness and familiarity with Bielsa’s new style, and the defence — when it’s not up against Swansea’s Mr Potato Head version of Conor McGregor, Oli McBurnie — has been coping well enough without him. Jansson is like Patrick Bamford, Jamal Blackman, Lewis Baker and Jack Harrison; a latecomer in training, learning and catching up, waiting for a chance.

How is this making Jansson feel? Angry, ready to demand a transfer, to fake an injury? It looks that way, from stroking a thumb across the porcupine back of LUFC Twitter. But the counter argument comes in a series of photographs The Square Ball’s photographer Lee Brown took of the players warming up for the Rotherham United match on Saturday. The substitutes did their own exercises, away from the first team players, the ideal opportunity for the Jansson scowl to reveal itself, assuming he could drop his lip low enough for us to see his face. Instead, as I scrolled through Lee’s photos, seeing Pontus was like finding a shoebox full of pictures from your grandparents’ wedding day; with a warm genuine smile, here was someone enjoying his life, with people he loves to be around. Maybe he would have loved to be around Luke Ayling and Liam Cooper, lining up for the first team; but if kicking the ball about with Tom Pearce and Jamie Shackleton was a pain for Pontus, he hid it very well. The pictures are a whole mood; a bright, happy, relaxed one. 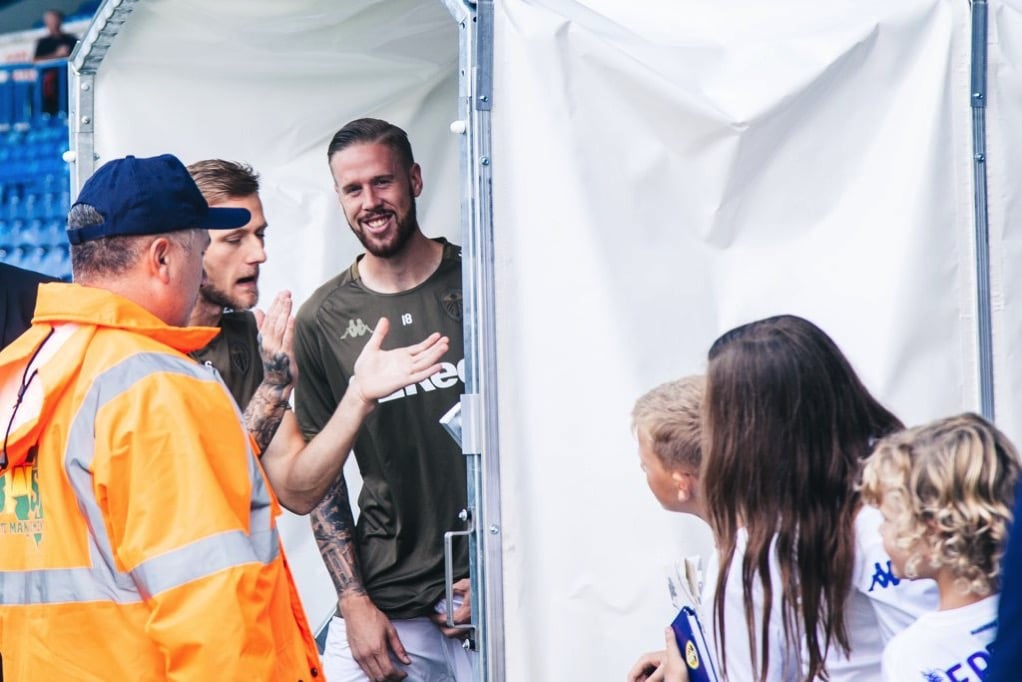 There was another moment, possibly my favourite of the season so far, even though it took place long ago in the first game. When Samu Saiz set up Mateusz Klich for the first goal of the season, after fifteen exhilarating minutes of the Bielsa era at Elland Road, he didn’t run to Klich to celebrate; he sprinted to the bench and leapt into Jansson’s strong arms, to be held aloft like a little World Cup by Sweden’s occasional international captain. Perhaps I read the situation wrong; perhaps Saiz only wanted to remind Jansson that soon they would be celebrating together this way in Krasnodar, far from this hated Leeds; but whatever was behind the gesture, something had bonded playmaker to substitute that was worth the moment.

Perhaps Saiz had just missed Jansson over the summer. Perhaps it was something like Bamford telling Kemar Roofe to be more selfish and score more goals, even if it keeps him out of the team. Or perhaps the division between first team and reserve is not as distinct as we think it is, or as it might be, if Bielsa started following everyone’s advice and signed a new centre-half.

“When you have many possibilities to play regularly it gives you a better state of mind,” said Bielsa a few weeks ago, taking a break from bucket chat to talk about squad size. “When you have more than 22 players, [then] in some positions instead of two you have three possibilities. This, having three for one, diminishes the enthusiasm.”

In other words, a player like Jansson has no reason to worry about not being in the team right now. With such a small squad, there is no question that he’ll be in the team later in the season. There will be no need for showdown talks with the boss; the boss speaks sincerely, and the situation is perfectly clear. Bielsa will be using all 22 players, and that’s the team. There is not a first eleven at Leeds United anymore; there are 22 players who can deliver Bielsa’s vision of football, together. The triple training sessions and Thorp Arch siestas aren’t just for fitness; Bielsa remodelled the architecture at the training ground to isolate and incubate the first-22, creating togetherness around a shared obsession: winning games.

Would a new signing share that obsession? Would he lessen the obsession of the players already here? Bielsa has been asked on the regular about bringing in another centre-half as cover, but that’s a debate that, for Bielsa, is settled not by numbers, but by spirit. In his press conference before the Norwich City match, he spoke at length about being caught in a white lie by Hernan Crespo; trying to make the young player feel more confident, Bielsa complimented Crespo’s maturity, but years later, praising how he had grown up, Crespo reminded him of the earlier flattery.

This was years ago, but it illustrated a point Bielsa was making about his methods; he has to believe in them sincerely, not only in words but in actions, for his players to believe in them too. So if he has told Conor Shaughnessy that he is understudy to the current central defenders, he can’t replace him with a new signing, or he’ll be apologising to him ten years from now the way he apologised to Crespo. “When I speak, I try not to please people,” Bielsa said in one of his first press conferences at Leeds. “When I speak I try not to lie, I try to tell the truth.” Read his lips: no new defenders.

And read Pontus Jansson’s face. If Jansson has no reason to be upset, why do we? He’s been a curious case at Leeds, ever since he celebrated tackling a Huddersfield Town player in his second game as if he was Brendan Ormsby scoring against QPR. Few players do less to hide their emotions: when he’s happy, he runs to the fans and punches the air, and when he’s sad, he turns his entire face upside down and glooms away down the tunnel. If there’s any doubt how he’s feeling, there will be an Instagram post explaining it. He grew up supporting Malmo from the terraces; he experiences football like we do, as a fan, with nothing more sinister motivating his passions than you or I. And yet, with so much to read in this open book, no player has more opinions projected onto him, subjecting him to a harsh light that obscures the evidence, and dims our overall view. Pontus is a talking point, but nobody stops to listen to him. Maybe he doesn’t have as much to say as we think; maybe it’s written all over his face. ◉

(If you liked reading this, would you pay a pound a month for it? Click here to support Moscowhite on Patreon.)