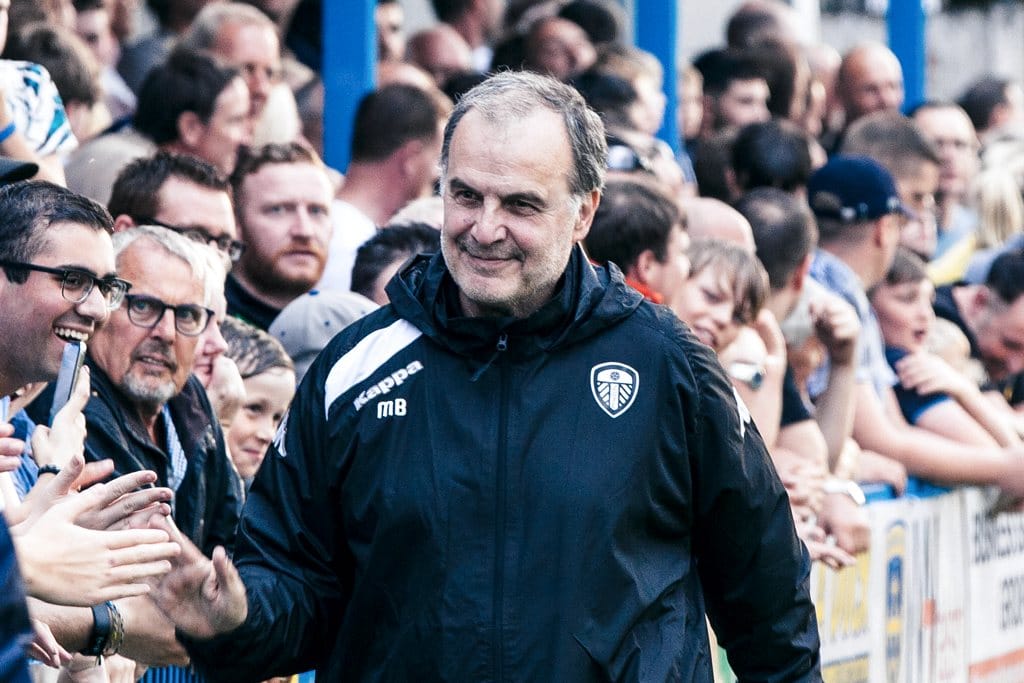 This is where all the hours of preparation and analysis gets you: trapped in an English football metaphor and laughed at by God.

Stoke City, whose main contribution to football since Stanley Matthews retired is a cold Tuesday night of the imagination used to warn foreigners, and their devout new manager Nathan Jones, did a number on Marcelo Bielsa just days after Bielsa projected his spreadsheets on a wall and let the world see how he’d figured out Frank Lampard’s Derby County. He also told Nathan Jones what he’d figured out about him, so Jones figured he’d better do something different.

“It’s been well publicised,” Jones said after the game. “Marcelo has watched 26 Luton games and he’s watched two Stoke games, so he’s well drilled on what our usual formation is. We thought we may have to give him a surprise.”

All was as it should be for Leeds; over 71 per cent possession, over three-and-a-half times as many completed passes as Stoke. Adam Forshaw, Pablo Hernandez and Mateusz Klich dominated the ball; Bailey Peacock-Farrell completed just four fewer passes than Charlie Adam, Stoke’s most involved player.

But Jones, who prefers to give the credit for his career to God than to himself, was characteristically underselling his tactical switch. A surprise would have been Jack Butland upfront and Peter Crouch in goal. What Jones chose was a formation like Kryptonite to United’s attacking. Kemar Roofe was made invisible behind three centre-backs, while Jacks Clarke and Harrison struggled to find space behind two energetic wing-backs, so that Klich played in a state of confusion. Given the ball in attacking areas, he could only see distant glimpses of United’s attacking players, all but eclipsed by Ryan Shawcross, Bruno Martins Indi and Ashley Williams.

300 hours of analysis, 26 Luton Town matches, 500 passes precisely; what good did any of it do? That’s the theme of this match. What was the good of any of it, in the end, on a cold Saturday afternoon in Stoke? Two good old fashioned crosses did for Leeds; the first headed to Sam Clucas at the start of the second half by Liam Cooper then Klich, the second fizzing across the six-yard box at the end of the half for Joe Allen to finish. Pontus Jansson might have blocked that ball, but he’d been in the changing rooms for ten minutes after getting one yellow card for dissent, and a second for stumbling and colliding with Benik Afobe, who was indifferent to the contact and kept running to try beating Peacock-Farrell anyway. Whether it was for Jansson’s head bouncing off Afobe’s leg or a handball on the floor, that decision looked worthy of dissent.

Ezgjan Alioski scored at the end of stoppage time, but it was an almost cruel reference to our Christmas comebacks, and the referee blew for full-time before Leeds got any ideas about an equaliser. At the end of a week in which Marcelo Bielsa was put on display for all English football to dissect, looking for traces of sportsmanship and familiar culture, the final whistle blew like a judgement on his methods. Nathan Jones, meanwhile, took to the pitch, yelling a prayer of thanks into the Stoke sky, although I wonder what the Almighty made of Jones bellowing, ‘Get the fuck in!’

Bielsa, then, with his spies and his staff and his analysis and his dedication, can’t do it on a cold Saturday in Stoke. But anyone who took his midweek lecture as a guarantee of success misunderstood. One of the most quoted parts is an anecdote about Pep Guardiola, who was astonished by the analysis Bielsa did on his Barcelona team; “You know more about Barcelona than me,” he said. But the punchline, added Bielsa, was that, “it was useless because they scored three goals against us,” and won 3-0, and won the Copa Del Rey.

At Thorp Arch, as one of United’s coaches explained their study of Derby’s set-pieces, Bielsa interrupted: “Is this useful? No, because half of the goals we concede are from set pieces.” Twenty staff work on each game for Bielsa, creating “a volume of information.” The amount of information is, he says, “Absolutely not necessary … it doesn’t define the path of the competition.”

Before anybody could look at the result in Stoke and scoff — “I know that people laugh at you, when you create this much data,” Bielsa said on Wednesday — he had already answered the post-match rhetorical: Where does all this work get you? No nearer to winning than before you did it. There’s no advantage, fair or unfair; but he does it anyway.

It has been the preoccupation and perhaps the frustration of Bielsa’s entire career. He once said that, “If football was played by robots, I’d win everything,” because no matter what Frank Lampard might say, Bielsa’s pre-match analysis has always exceeded his peers’, and if he could use it to programme automatic players, he would have few rivals. Football would be a test of coaches, rather than players, and Bielsa would win.

But football is ultimately a test of players, not coaches, which is the true lesson of the ‘spygate’ controversy and United’s subsequent defeat at Stoke, and the point Bielsa tried to make in front of the media this week. Whatever he does before a game doesn’t end with programming a robot and watching as it carries out a preordained scheme. It ends with instructing Mateusz Klich and hoping he can do what you tell him. If Klich is fit enough, has been taught well enough, if training has been comprehensive enough, he might be close enough to robotic to win the game as predicted. But he probably won’t.

Nathan Jones once gave away a penalty in a play-off semi-final. “I went to God after the game and said, ‘Why did you do that?’ It was a big moment. And all he said was: ‘Be still and know that I am God.'” His team, Yeovil, won the second leg 5-2. “I let God guide my life because He’s done a wonderful job for me,” says Jones. “Too many things have happened to me in my career for it not to be God’s will.”

Jones might believe in a higher power directing football matches, but Bielsa does not; not even his own power. God might have done a wonderful job for Jones, but Bielsa’s obsession with the fragility of the humans who play football has caused him a lifetime of stress; a good argument for the surety of faith, I suppose. Bielsa took on Stoke with a set of footballing principles he designed thirty years ago, that in the years since have not been refined so much as anxiously tested again and again. While supporters of the clubs and countries he’s managed equate Bielsa to God, Bielsa works with the certainty that he doesn’t exist, God or Bielsa, unless he can prove it. He can’t prove the existence of God, so he sticks to football. 300 hours of analysis, 26 Luton Town matches and 500 passes precisely prove only one thing: that Marcelo Bielsa exists.

Defeat proves it too. Bielsa has spoken of football played by robots, and Jones believes in guided disciples, but I think Bielsa feels horror in those ideas. Football is played by footballers, and that’s the game; they’re the vessels for your week’s work, and that’s what brings Bielsa back to his bucket, day after day. To lose to Stoke is to be glad of the humanity of Pontus Jansson, even as his flaws cause such pain. Hurting’s living; is Bielsa ever more alive than when he’s up all night with a video of a defeat on his laptop, a notebook in his hand, and a pain in his heart? ◉