The beginning was innocuous. At a Chelsea corner in the second minute, referee Graham Poll told Gary Kelly and Bruno Ribeiro to get ten yards away from the ball. There must have been only inches between them, but eventually Poll booked Kelly for not moving back as far as Ribeiro. So that was one.

Jimmy Hasselbaink had already caused trouble in front of the benches by pretending Dan Petrescu’s arm had struck his face, and now the game was on. “Obviously George Graham wound them up before the game,” Chelsea defender Frank Sinclair said later, “because they came out and they were trying to kick us all over the gaff.” 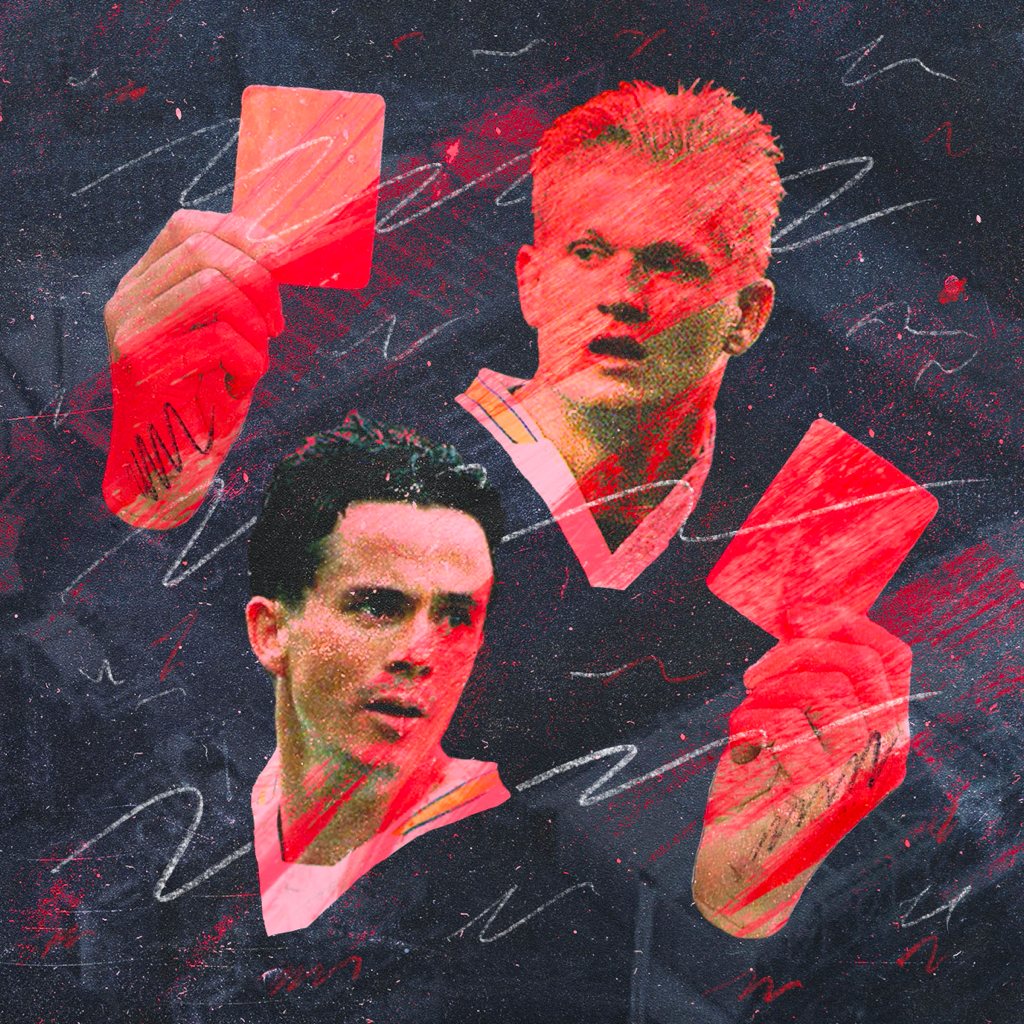 Leeds United boss Graham denied that. But he had switched to a three-player defence so Lucas Radebe could mark Gianfranco Zola, and that process began with a scything tackle through the back of Zola in the seventh minute. It earned Radebe the game’s second booking and wasn’t far from a red, and as he tried to pick Zola up while Chelsea players ran over to protest, raised the temperature at Stamford Bridge.

The days before the game had been spent looking back with fondness at the good old days when tackles like these were the norm. On Thursday, Billy Bremner’s life had been celebrated, following his shock early passing. Hundreds attended the funeral, including old opponents like Nobby Stiles, who was ready to stand outside the church to pay his respects on a freezing December day in Doncaster but was ushered inside, as welcome as anyone. The group drinking at Peter Lorimer’s pub in Leeds later was more select, Bobby Collins, Johnny Giles, Jimmy Lumsden and others from the Revie family holding court until the early hours.

If a way of playing had gone by with Bremner, nobody had told Leeds. Roberto Di Matteo sent Alfie Haaland flying in midfield, then Frank Sinclair clattered David Robertson on the wing. That was just a throw-in, but the break gave Di Matteo time to turn a running war of words with Haaland into an off the ball shove, which Haaland willingly upgraded with a firm kick to the shins. Neither went down but Poll, deciding he didn’t want to see what they had to do to knock each other over, gave them both yellow cards.

Now Haaland’s midfield partner Ribeiro was ready. Poll actually let him off with a warning for a two-footed swipe through Dennis Wise’s legs, despite Graeme Le Saux’s disbelieving laughter when he was unable to persuade the ref to show a card. There was audible tension in the crowd like you’d get at a boxing match, waiting to see who would launch the next assault, and as Hasselbaink, Haaland and Rod Wallace closed on a loose ball, Michael Duberry obliged.

Duberry launched himself over the ball at Haaland but missed him, hit Hasselbaink, but only hurt himself. Wise then leapt two footed to win the ball from Hasselbaink, so Haaland kicked Wise’s legs out from under him, they kicked each other, and in the general kerfuffle that followed Wise got a yellow and Haaland got his second, after 24 minutes of not exactly play.

The next yellow was for Robertson for kicking the back of Petrescu’s legs, then Ribeiro, who carefully watched Le Saux’s run down the wing and wasn’t quite as careful about how he stopped it. Chelsea’s Mark Nicholls got one for lunging so late at Kelly he couldn’t stretch far enough to connect. Just before half-time, Hasselbaink got into a tussle with Frank Leboeuf and Wise on halfway, bringing the latter down twice meaning a free-kick that let Leboeuf escape with the ball; Gary Kelly wasn’t having that, so slid through the back of him, calmly getting to his feet then trotting off the pitch before Graham Poll even had his second yellow out of his pocket.

The half-time stats showed three yellow cards for Chelsea, two red cards and three other players booked for Leeds. There had been one shot at goal, Dennis Wise hitting wide. For the second half Graham replaced Hasselbaink with Derek Lilley, reminded his players of their dour defensive form from the previous season, and sent them out to play 4-3-1 and get a draw. Radebe was excellent, stifling Zola despite his early yellow card; David Hopkin sliced a clearance away from an empty net when Leboeuf flicked a corner; Tore Andre Flo had a header into the net disallowed and put another just wide; Nigel Martyn was Nigel Martyn, with a brilliant save from Duberry’s header. Ribeiro almost won it with a dipping volley that went just over, and the away fans sang, ‘You’re Leeds and we’re proud of you’. There were no more bookings and the free-kick count was kept in single figures, but the prolonged full-time debate between Chelsea manager Ruud Gullit and Graham’s assistant David O’Leary indicated peace was not about to break out.

After the game, Gullit pointed out that the Leeds players were angry with each other at half-time, ‘screaming’, he said, at Gary Kelly for his stupidity. But Graham tried to stay one step ahead by agreeing with him, in his own fashion. Kelly’s first yellow, for not retreating, was silly, although the referee could have shown more common sense; still, Kelly should have known better. “I want passion and commitment from my team but I won’t stand for indiscipline,” he said.

“But some of the diving should be looked at too,” he added. “It is one of the things creeping into our game. Players were diving then getting straight up as soon as the booking was given. I didn’t see the physios on the field very often.”

Gullit wasn’t having that. “People wondered why the ref was booking players when none was injured. Do you have to be injured? We’ve a few players with bruises on their calves — I wonder how that happened?”

But Graham was insistent with his reasoning and his attempts at reverse psychology. Not only had Leeds helped Graham Poll in the end — “We helped the ref in the second half with the wonderful organisation shown by our nine players” — the whole question of Chelsea players diving could have been dealt with by booking Hasselbaink right at the start. “If I was the referee I would have booked him in the first minute,” said Graham. “If he had booked Jimmy then, others might have got the message.”

That brought Graham Poll into the discussion, where he sounded only too pleased to be the centre of attention.

“How many players get booked for that over here?” Poll asked. “I don’t want to comment on the accusation that players were diving, but it’s a testimony to my refereeing that no players went off seriously injured.”

The papers were soon speculating about the potentially disastrous consequences of such a game. Glenn Moore in the Independent summed up all the arguments:

‘The game has moved on and matches like Saturday do English football no good at all. This is not because Mr and Mrs Audi would stop taking Tarquin and Tara to football if it looked “rough”. It is because matches like this set an appalling example for amateur players — Sunday morning games like this end in brawls — while leaving the professionals ill-equipped for European and global challenges.’

Gullit spoke about how, in European competitions, teams could never play like Leeds because. “You have to resolve the game tactically and technically. It demands more of people.” Graham insisted, though, that “We’re not a dirty side.” They just happened to be top of the disciplinary league, with 42 yellow cards and three red in eighteen games.

Harry Harris, meanwhile, in the Daily Mirror, spotted Norman Hunter in his role commentating for Radio Leeds, ‘Grinning all over his face. How he must have loved it.’ And the truth was that, to Leeds fans, while the game might have outraged certain niceties of modern football, the performance had been just what was needed to get them and Norman smiling again after one of the most difficult weeks in the club’s history.

There was no statue to Billy Bremner then, so the Elland Road gates had borne the weight of the shirts and the flowers left in his honour. “He was certainly no angel,” Bobby Collins observed. “But he’ll be in heaven all the same.” ◉