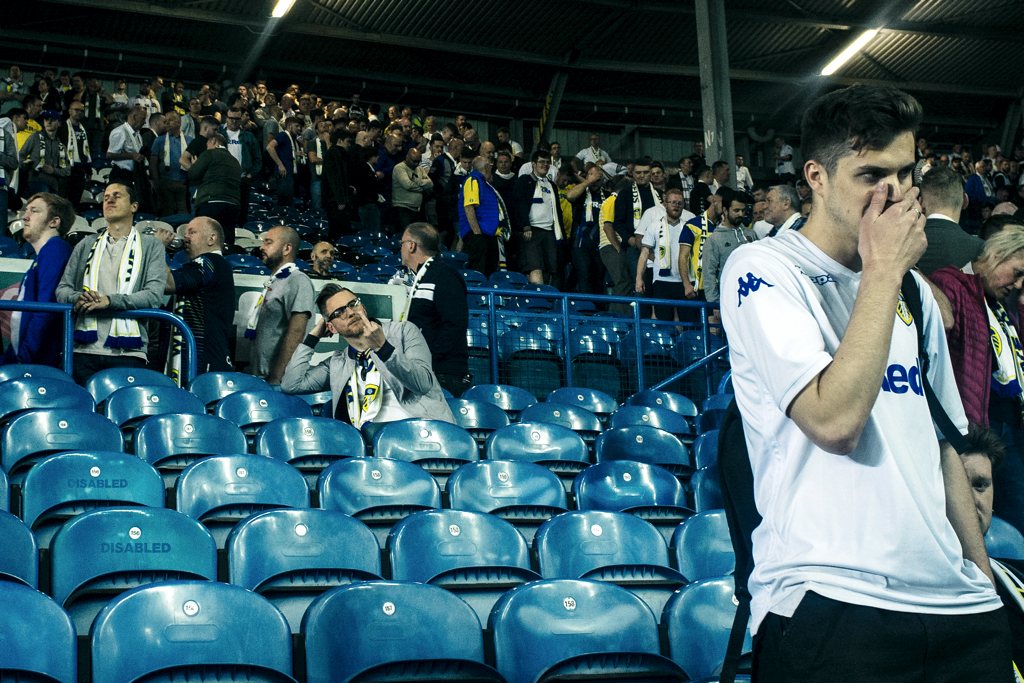 Clubs are notified of the new season’s fixtures in advance, so they can complain, prepare graphics, and think of soundbites. Imagine the brainstorming session at Ashton Gate when the media and communications team, still flush from discovering Tumblr two years ago, met to brief Bristol City manager Lee Johnson on the opening match against Leeds United.

“Do a joke about spying.”

“Okay. Any other business?”

As Johnson, like a soft toy with a speaker in his throat, let journalists squeeze his tummy one by one and metallically repeated his one-note gag six months too late, the new season was already feeling very old indeed. There has been time since mid-May to forget the play-off semi-final ever happened, but not enough. Derby County tweeted some banter to remind us we’re still in the Championship, so that was also great fun.

I’ve had some time, since the memory of that game was replaced by the fever of takeover speculation, to think about last season, and about football, and about joy. That’s the test at the heart of ‘organising consultant’ Marie Kondo’s famous decluttering method: consider each object in your life and ask yourself whether it sparks joy. A framed photograph of Lee Chapman? It sparks more than a hospital staff room in a Mills & Boon novel, of course it should stay. Absolutely everything else to do with the sport of football? Just put it all in the bin.

Last season was a perfect example of how football can be such a joyless drain. Most of it was actually a joy; Leeds haven’t played such good football in twenty years, or won as many games in ten. Week after week we went to support the team, and week after week we came home happy. And that’s football in its purest form: buy a ticket, watch two teams play a game, hope one wins, feel happy when they do. In a naive way, last season was a time of joys.

But on a league ladder no game is an end in itself, and what I wonder, while thinking about whether football brings me joy, is the impact promotion and relegation has on the game’s simple pleasures. Promotion in our case, thankfully, or at least the prospect of it. Promotion seems like the ultimate joy of joys, the euphoric high we’ve been chasing for ten years. But the pain of not achieving it was so total that I could hardly look at a Mitre Delta for weeks, and all the joy I’d taken from the season felt lost.

The concept of promotion corrupts happiness. I mentioned above about the simple, naive joy sparked when Leeds United win individual games of football. But of course that joy was never separate from the idea that, the more it happened, the more chance Leeds had of being promoted. The 4-0 win over West Bromwich Albion in March was as near to perfection as I’ve known; a goal in the first twenty seconds followed by a dominant performance and three more goals at neat thirty-minute intervals. But the simple satisfaction of that win was changed by the way it changed the league table. As I walked back into town that night, a taxi drove by with its windows down, with a crowd of young women in the back leaning out and singing Marching on Together; I half-expected to find Liam Cooper in City Square with the Championship trophy. The idea that Leeds were going up enhanced the euphoria of the win, but only temporarily; as Marcelo Bielsa will tell you, such happiness is distorting. Now, in retrospect, the pleasure of that complete 4-0 game is corrupted by what the league table ultimately did to us.

Promotion corrupts in other ways. It’s the reason that Jack Clarke might be sold, because the financial gap between the top of the Championship and the bottom of the Premier League can only be filled by transmuting young souls into cash. The other option, of selling the entire club lock-stock to a foreign state, doesn’t hold much appeal either; and what appeal it does have depends on the idea that it’s the only way to get promoted. The price seems high.

Promotion’s existence also means we can be hurt by its absence, as we’re experiencing now. The new fixture list contains so few pleasures that Marie Kondo is already trying to feed it into the garbage disposal. Familiarity breeds contempt, and it’s hard not to feel condemned, each June, to play Bristol City, Reading and Preston North End forever. There are some new teams, but they’re Luton, Charlton and Barnsley; it’s good that Huddersfield Town aren’t in the Premier League anymore, but bad that we’ll have to go through the rigmarole of playing them twice. To hear Lee Johnson, in June, already saying that playing Leeds will be like a cup final, is as tedious as it will be when Millwall’s Neil Harris is saying it in October. We’ve been waiting for our play-off defeat to sink in; surely it’s sinking in now, knowing we have to play Derby and Richard Keogh yet again.

The solution football offers to that interminable grind is promotion; that’s how we should satisfy the thirst for novelty, and freshen up the fixture list with Manchester City, Liverpool, Spurs and Arsenal, games those clubs want just as much as we do. The Premier League’s top six must be looking at Norwich City creeping towards them like a flood of mustard and wondering, too, if promotion isn’t flawed as a concept. That’s actually been the top clubs’ argument for years, and is inspiring the pushing by European clubs for restricting Champions League qualification to four places a season, with the rest of the teams locked in. Keep sending us dross like Cardiff City, they say, and we’ll do away with promotion altogether.

I wonder if that might be a good idea. Not to have the four English divisions locked as they are in perpetuity; that would be exchanging our second division purgatory for hell. But to replace promotion and relegation and their painful, corrupting influence with something more pure, something that elevates the joy of ninety minutes at 3pm above the draining straining for promotion, the structural necessity to exchange young players for money.

My proposal is to make each of the four divisions equal and to decide the teams within each one at the start of each season, by chance. Wipe the league tables clean each summer and hold a draw, next to the veg in Morrisons if you must, to decide who plays who. Replace the despair of playing the same old teams every year with the thrill of finding out you’re in a division with both Manchester City and Macclesfield one season, Liverpool and Lincoln City the next. Revenue will still favour the most popular clubs but now smaller clubs will receive a greater share, not through reluctant and haphazard distribution payments, but when Port Vale’s two league games against Chelsea are shown around the world and the takings are split. The financial pressure on what are now the smaller clubs would be reduced, along with the desire of their best players to seek a transfer to test themselves against the best; you can compete against Virgil Van Dijk while playing for Grimsby, while after moving to Spurs you might still be playing against Northampton next season anyway. Should Colchester get a strong team together, they’d have a greater chance of keeping them together, attracting larger crowds to see them, and gradually becoming competitive against today’s top sides in a way that once-a-decade cup games don’t help.

Imagine this week had announced a fresh jumble of new opponents, all with strong, competitive teams, with the painful prospect of missing out on promotion and wondering which of our players will be forced to leave removed from the joy of victory and the pain of defeat. There would still be competition; the top teams of each division would play-off in either a four or eight-team tournament to decide European places and, ultimately, the national champions; a similar tournament of bottom-placed clubs would decide relegation, allowing new entries from non-league.

But from August to April the game would return to a form more like it had before league football was invented; eleven versus eleven for ninety minutes, deciding a winner on the day, without context creeping around the edges to constantly remind you that this game doesn’t matter, because all that matters is getting to the end and finding out whether your club will play Manchester City next season, or Middlesbrough. Imagine feeling the joy of a win, without instantly plunging into a funk of meaninglessness beneath the colossal weights of divisions above and below.

Get rid of promotion and put it all into balls in one big summer bag. Turn each season’s fixture list into 46 fresh chances to spark joy, instead of a stale menu of failure. Make watching young players a fun experience, without the fear of who else might be watching them, ready to buy. Replace the urge to sell out the entire club with the confidence that self-ownership isn’t a barrier to competing with the best. Let’s play Arsenal and Accrington Stanley; and let’s kick MK Dons out while we’re reorganising.

I know: it’s all a stupid idea and probably wouldn’t work. But watching computers measuring millimetre movements by goalkeepers committing the crime of trying to save penalties at the Women’s World Cup, I don’t think stupid ideas that don’t work are beyond football’s possibilities. ◉