Here went another decent night’s work undone because football is a stupid game and unfair and everyone cheats except Leeds. From the pre-game lightshow for nobody to the new graphics on the Premier League ball to Fosun’s billions behind Wolves to VAR. I blame and hate them all.

“I must add,” said Marcelo Bielsa, asked about the positives in the game, “That defeats always generate a lot of sadness.” That’s right.

In the 62nd minute Liam Cooper had neither his first or last chance to score from a dead Raphinha ball streaking like life-giving lightning through the penalty area, and he guided his steady header right at goalkeeper Rui Patrício, who with Conor Coady’s help kept out Pat Bamford’s follow-up.

Moments later Adama Traoré span Luke Ayling on the touchline, ran beyond him and never quite into Pascal Struijk’s clutches as he moved infield and shot from twenty yards. The ball hit the post, hit the back of Illan Meslier’s head, and hit the net. 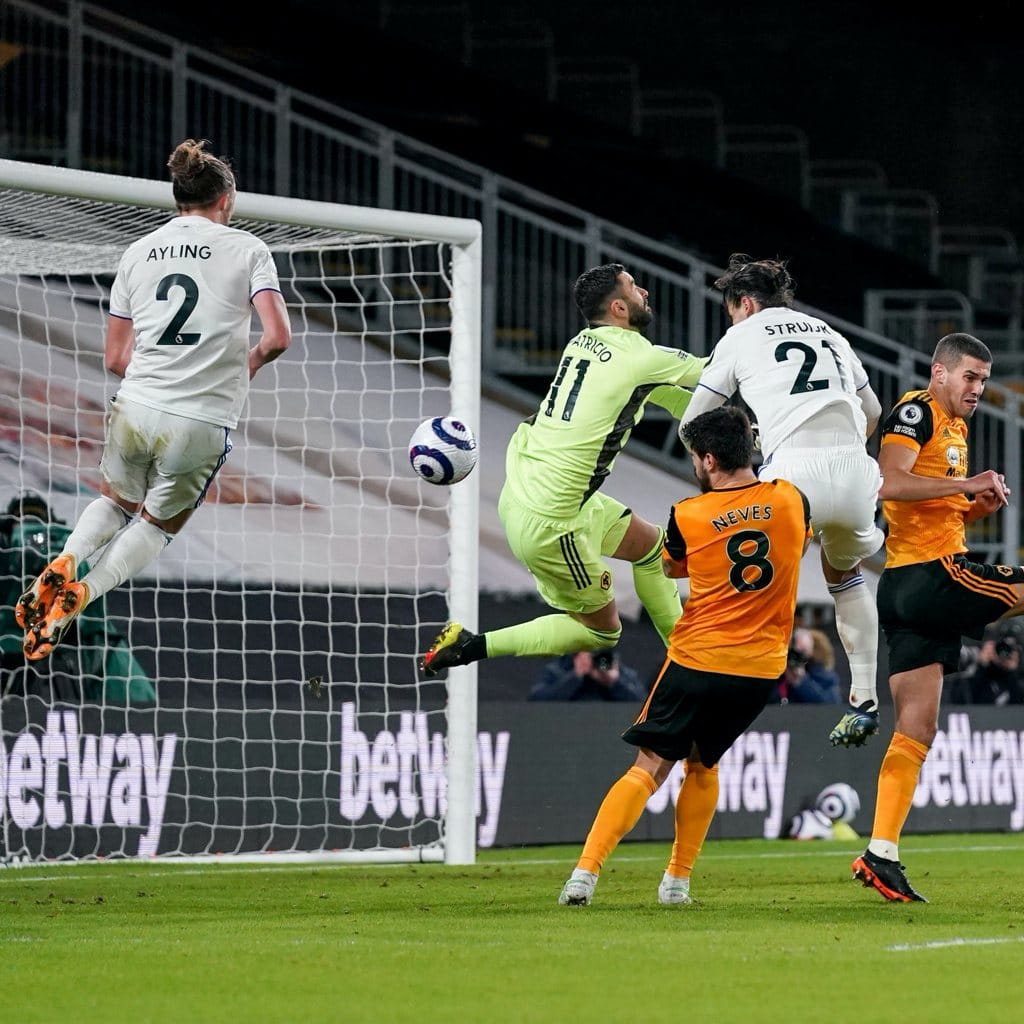 Are we supposed to make some sort of critical judgement out of this nonsense? Hmm, let me stroke my chin, and wonder what a football bouncing off the back of a goalie’s head says about the state of Leeds United Football Club in February 2021. The game was lost and won by centimetres, including an equaliser by Bamford that was denied by a pixel-thin offside call. It all happened beyond tactics, decisions and intentions. When you do everything right you’re supposed to get something for it. Not in football. And only in football can you be criticised for not getting what you deserve.

“I have the idea that the team has to go above and beyond, so that luck isn’t a factor in the result,” said Bielsa, and Howard Wilkinson used to say the same thing; that the job of the manager is to make sure that luck’s influence is irrelevant. You could never stop mad things from happening, he thought, but if you’re already 4-0 up, an unlucky bounce can’t do you much harm. At 0-0 it’s fatal, but it would be harsh to argue Leeds didn’t do enough in the game to overcome their misfortune. The argument is always won by the result, though.

It would also be wrong to conclude that Wolves are somehow a much better team than Leeds based on their two 1-0 wins this season. They’re effective at holding onto leads, that’s for sure, although not ‘good’, which implies morality. I’m saying they’re a bunch of time-wasting bastards when they go ahead, in case that’s not clear. But when we compare this season’s matches to the 4-1 and 3-0 turnovers Wolves did unto Leeds in the Championship, we get the bigger story.

After the second of those games, at Elland Road in March 2018, Andrea Radrizzani got headlines for tweeting that the Championship was not “a fair competition” with Wolves in it, because it was “not legal and fair” for them to be owned by a conglomerate that also had shares in Jorge Mendes’ player agency. It was the start of a love-hate relationship with ‘The Wolves Model’, as for a while Radrizzani seemed to think if he couldn’t beat it, he could emulate it. That was dropped in favour of the Brighton Model, the City Group Ownership Model, lately the Leicester Model; he’s got more models than Kraftwerk, and the 49ers are on board for that reason, because Radrizzani wants to emulate their commercial model. 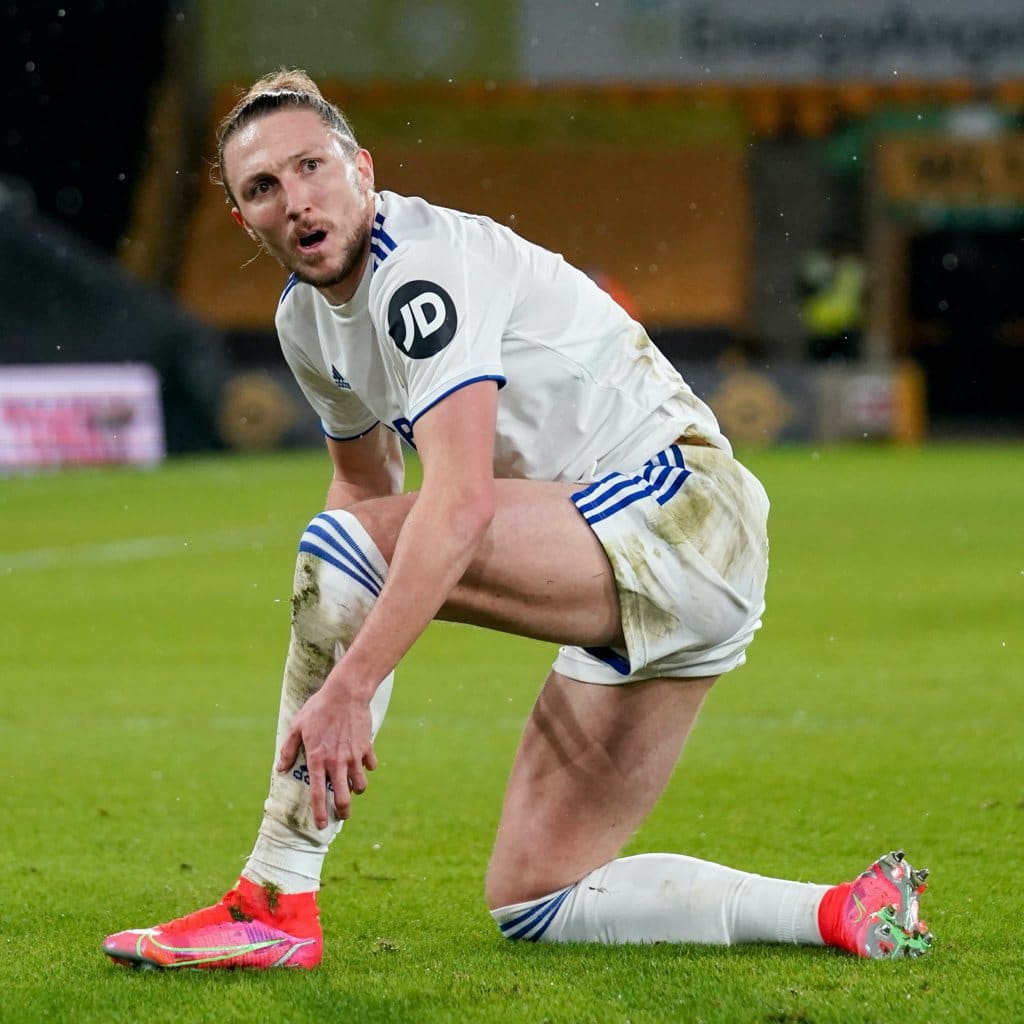 At times it has felt like an identity crisis, but I wonder if Radrizzani is more at peace with the idea of Wolves now, and with his Leeds Model. The desperate grasping for ideas in the Championship was a symptom of feeling like Wolves and others had advantages meaning they could never be caught. The funds and interests of Fosun, the Chinese conglomerate that owns Wolves, are so vast that the club wasn’t even mentioned in their annual reports while in the Football League. It was as if Fosun handed them and Mendes a limitless credit account and forgot they existed. If aspects of that appealed to Radrizzani at the time, while speaking to the Financial Times Business of Football conference this week it sounded like it was just a passing, jealous fancy.

Perhaps Radrizzani is arriving at the knowledge that whatever model he works with is less important than doing the work itself, that Leeds United can’t just be a line on his Aser Group’s balance sheet, the way Wolves look like an Excel error to the accountants at Fosun. His perfect job is to wake up every morning and run a football club, and while that’s not without downsides — see the life of Peter Ridsdale, 1998-2004 — it contributes to the overall atmosphere of contentment about Leeds United, even in defeat. We lose 6-2 at Old Trafford and 4-2 at the Emirates, but we wouldn’t want to be anybody else, doing things any other way.

Radrizzani got here without selling Leeds’ soul, although it was close. In the two games with Wolves in 2017/18 United fielded Luke Ayling, Liam Cooper, Ezgjan Alioski, Gaetano Berardi, Pablo Hernandez, Kalvin Phillips, Stuart Dallas and Adam Forshaw. After the 3-0 defeat at Elland Road in March, Radrizzani was fuming not just about the opposition but the lack of payback from a squad that had been given improved contracts and training camps in Spain. Manager Paul Heckingbottom lamented that Leeds didn’t have, “That winning, run through a brick wall mentality,” he had enjoyed from his players at Barnsley. “It’s easier to buy in,” he said. “Growing and developing, it takes a long time, because to a certain extent you are what you are. But with buying in, we can create an environment that can shape things.”

Heckingbottom wasn’t entirely wrong; Leeds have benefited greatly from buying-in Raphinha, for example. But it’s United’s long term blessing that Radrizzani listened to Heckingbottom’s ideas and concluded that the environment he needed to buy-in was Marcelo Bielsa’s.

If this weekend’s game has anything to say for itself, it’s about that development Heckingbottom didn’t have the patience for. Without Kalvin Phillips, and without an attacking midfielder in old gold to manage, Leeds tried something a little bit different. Jamie Shackleton was given a rare run in his favourite position, alongside and mirroring Mateusz Klich in midfield. Whenever Klich is off form or nursing his hurting hip, we tend to lament the lack of resources in midfield, wondering what might have become of Michael Cuisance, or maybe still might of Rodrigo De Paul. But then Shackleton puts in a performance like this and new players feel less urgent. Likewise, with Struijk and Cooper reunited in central defence, we can let Diego Llorente and Robin Koch take their time recovering.

Tyler Roberts earned his third start of the season with a smart assist for Helder Costa that was overlooked amid the chaos at the Emirates, and began against Wolves with a strong run from the right, slipping a pass to Bamford in the penalty area, causing danger. He would have notched another assist if Bamford’s equaliser had stood, after moving into space to offer substitute Pablo Hernandez an option while signalling to Bamford that a sweet through ball would be coming soon. He put Bamford into prime that-goal-at-Leicester territory and he promptly banged Roberts’ pass into the top corner, but less promptly he was ruled offside by VAR. After the game, while Roberts was chuckling politely through the BT Sport interviewer’s jokes about Cooper missing a hat-trick from Raphinha’s free-kicks, Bamford was tempting trouble with a sarcastic tweet about VAR “mAkInG tHe GaMe BeTtEr”. Apparently, after playing Wolves, there always has to be a tweet. 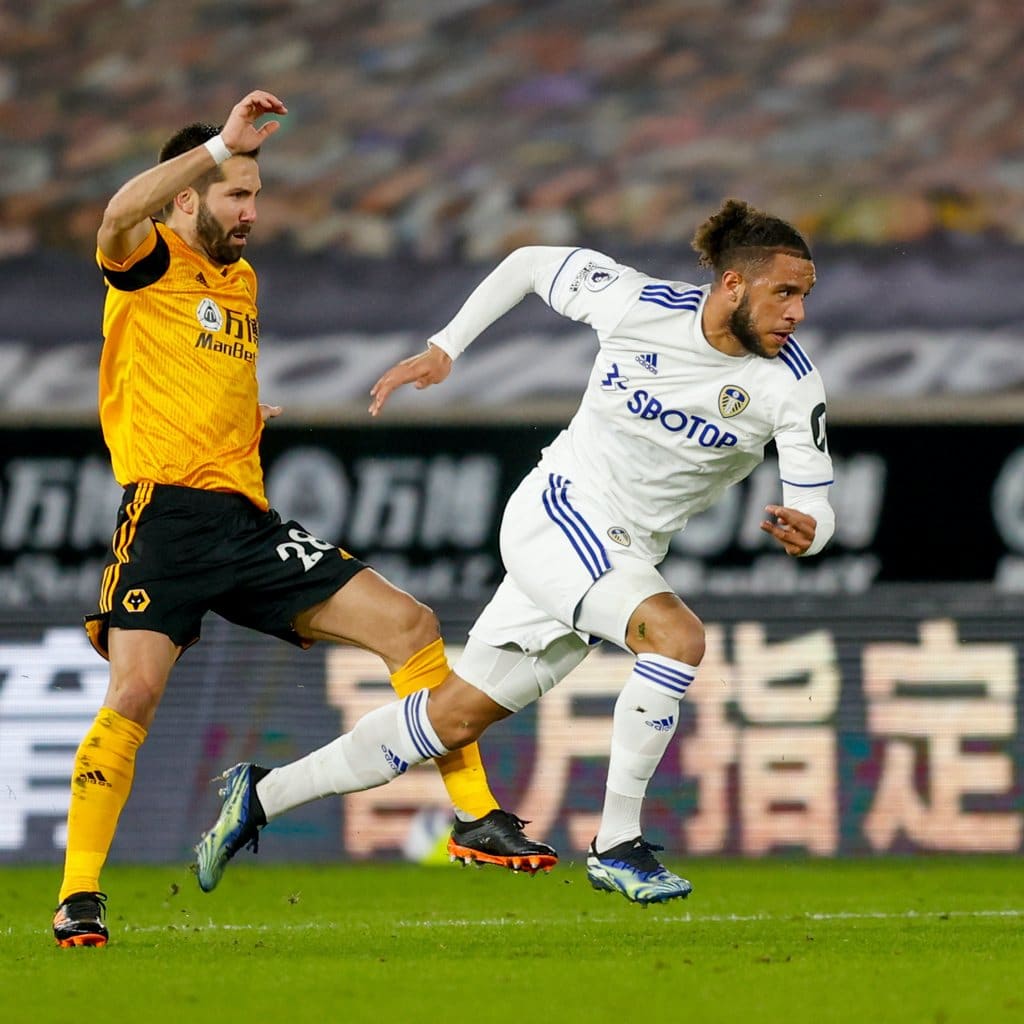 In open play Roberts was involved in creating as many chances as Raphinha, although his passing missed too many marks and his overall influence didn’t match his endeavour; nobody’s did, really, for despite all that was good about Leeds, Raphinha dominated the game by crossing dead balls. But it might be asking too much of Roberts, just turned 22, making his third start in the Premier League with less than 500 top flight minutes under his belt, to be running things at this stage. While Rodrigo is out, while Leeds are safe enough, Roberts is worth sticking with, just to see.

It’s hard to see Helder Costa through the gloom he never seems able to lift from his game. This was his game, in stoppage time, all his if he wanted it. He could have had the vital equaliser against his former club and former manager, the sort of goal that can turn a career, when Leander Dendoncker misjudged Raphinha’s high ball from halfway and Costa had the ball at his feet and twelve yards between him and glory. A stronger finish would have beaten Patrício, but Costa just doesn’t seem to have that in him this season. He was at Wolves in 2017/18, and as a substitute scored the penalty that made it 4-1 against Leeds at Molineux. Now it’s like he doesn’t know where he is or where he’s going.

Andrea Radrizzani looked happy with his life in the Instagram video captured at Camp Nou in midweek, showing off Raphinha reels on his phone, contemplating a Barcelona versus Leeds fixture in European competition without that feeling like an incredible impossibility. He can look forward because Leeds are no longer looking at Wolves. The teams are so evenly matched that, even after losing to them twice and perhaps finishing below them in the table, Leeds can say they’re ahead of their own plans now. The target of staying in the Premier League is all but met; the next aim is to be as good as Wolves and qualify for Europe in the next few seasons. Leeds are as good as Wolves now, so…? In football, as discussed, results don’t always follow as naturally as they should. But in the grand scheme of their aspirations, Leeds are gradually squeezing out luck’s ability to hinder their progress. ◉