Simon Walton is reflecting on a photo of his sixteen-year-old self sitting on the Elland Road turf, surrounded by angry Valencia players after being sent off against the Spanish champions and UEFA Cup holders. “When you’ve got Lucas Radebe fighting your corner, you know you’re doing okay,” he says, spotting The Chief running into shot and to his rescue.

Walton is used to being reminded of this moment, when the anniversary rolls around of the day he marked his first senior appearance at Elland Road with a goal and a red card in a pre-season friendly. Leeds were preparing for their first season following relegation from the Premier League in 2004, and Walton’s second half penalty kickstarted a comeback from two down to a creditable 2-2 draw with the side they had faced in a European Cup semi-final just three years earlier. Nobody ever asks him about the goal, though. “I just get the yearly bombardment of, ‘How do you get sent off in a friendly?’” 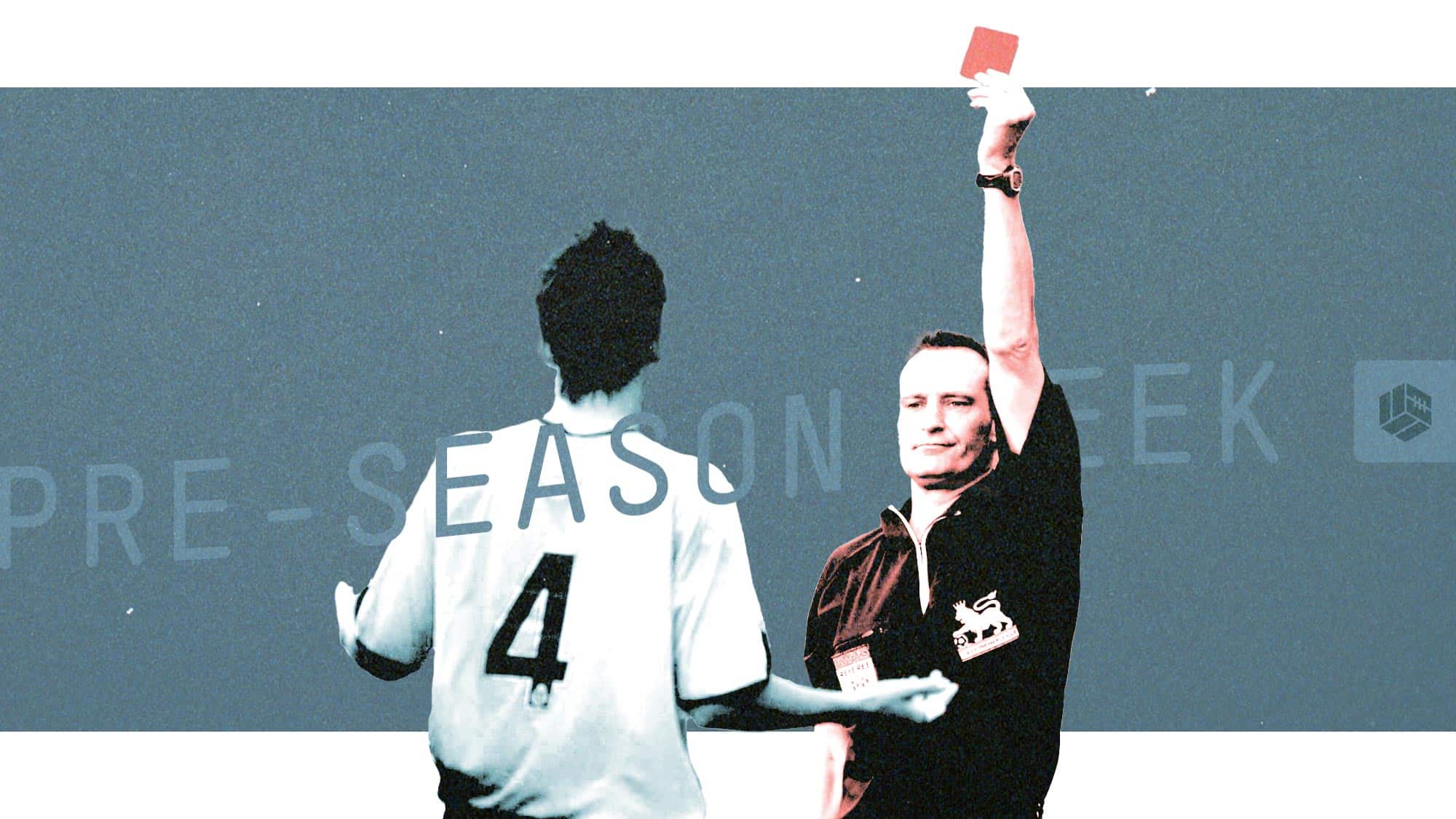 In Radebe, Walton was playing alongside one of his two main childhood heroes. In winding up one of Europe’s glamour clubs with his overly combative attitude for a friendly, he was emulating the other, David Batty. “I think that was a comparison that certainly my dad and older relatives used to say. Ian Baird, who I worked with at Havant, told me that Batts was a little bit of a menace in a couple of pre-season friendlies.”

Walton laughs: “I tried to model my game on both [Radebe and Batty]. Obviously I never reached the heights of those two, but I tried!”

Now 33, Walton has officially retired after a final few years in non-league “pretending to play”. And it is only now he is able to appreciate the sense of achievement of that weekend, which he ended by going for a meal with his family in a joint celebration of making his Leeds debut and completing his GCSEs.

He had trained with Leeds’ senior squad the previous season, upon the invitation of Eddie Gray, while still at school. Following relegation, Walton missed the first team’s pre-season tour of Sweden after returning late from the European Under-17 Championships. Once back at Thorp Arch, he found a clear path into Kevin Blackwell’s first team, as senior players were being sold off one by one.

“Back then you didn’t see a football for the first four or five days. I’d worked hard to get myself back fit. We were doing 400 metre runs and the usual standard pre-season. Funnily enough on Sky Sports the other day I saw Middlesbrough doing the same runs because a certain person is still there, so it’s not changed!

“You got mixed in with the first team, so you’d do runs with everyone together. Believe it or not, but I was an athlete back then. I’d run for the county and run in national and European finals as a 400 metre runner. I could run all day so would demolish the running. It wasn’t just the running — without being funny I had a little bit of footballing ability — but one thing that helped me progress a bit quicker than I would have done was the fact that I just blasted the running.

“If you’d have told people from my last few clubs that I was a top athlete they probably wouldn’t have believed you.”

Walton’s memorable afternoon against Valencia is often reported as his Leeds debut, but that actually came 48 hours earlier, in the less glamorous surroundings of a Friday night in Oldham. Playing in front of a Leeds away end in a 0-0 draw with a third tier side was meant to be the highlight of Walton’s weekend — “the atmosphere for me was massive, never mind Valencia” — until Jermaine Wright got injured in training on the Saturday. Suddenly, Walton was being asked whether he felt fit enough to start for the second time in three days.

“Obviously as a sixteen-year-old kid, I was as fit as a fiddle. I felt a million dollars. So it was a little bit of right place, right time. I was that young that I was more excited than nervous. I felt pressure more the older I got, but as a sixteen-year-old kid, when somebody tells you you’re playing at Elland Road on a Sunday afternoon, it’s more like a kid at Christmas.”

The players welcoming Walton into the first team group weren’t about to deflate his giddiness.

“I mean,” he says with a chuckle, “they let a stupid sixteen year old who, when the manager asked before the game who was taking penalties, put his hand up. If that happened nowadays I think they’d go, ‘Don’t worry, we’ll let someone else take it.’ I’d taken them before, it wasn’t my first ever penalty, but I remember Butts [Paul Butler] picked up the ball, slammed it into my stomach and went, ‘Here you go, son. Have that.’ It was slightly surreal in that moment.”

Much of the game itself is a blur now for Walton, even the order of the scoring (Mohamed Sissoko and Rufete put Valencia 2-0 up before Walton’s penalty and Mathew Spring’s equaliser). Instead, he remembers subtleties around the occasion, like not knowing the first team could park in a different car park to the youth players and having to walk through the crowd outside the stadium after being dropped off by his dad.

“It wasn’t like Kalvin Phillips was walking through the crowd, it was just some little kid with dodgy hair in a tracksuit,” Walton says. “All the older boys had a suit on but I was fortunate that I just had to wear my standard academy tracksuit.

“I’d been in the dressing room for Youth Cup games and we’d played at Elland Road for the reserves the season before, but not when it’s full. There were 20,000 people there, so there was obviously security outside. People like Martin Sykes, who I was meeting for the first time, were ushering me in going, ‘Here you go, young man, this is the way in,’ whereas before you could just mooch around.

“It was a different world. It was exciting. It was my first experience of not having to bring my own boots. It’s like a kid going to Willy Wonker’s Chocolate Factory. You’re looking around going, ‘Wow! What’s this? Where am I?’”

Two moments from the game itself are still imprinted on his memory. First, his penalty, whipped to the ‘keeper’s right, celebrated “like it was the winner”, a feeling that has stayed with him “like it was yesterday”. Then, the tackle that earned him a second yellow card and confirmed his afternoon of notoriety.

“I don’t quite remember the first yellow, I remember walking off. Paul Butler had been taken off and he was stood at the side of the pitch clapping me. I’d never seen a player being clapped when he’s been sent off before. All the fans had stood up and were clapping. To feel kind of proud while doing the walk of shame, that I’ve done a few times since, was surreal. It was the start of an absolute mad period for me going forward and it was a hell of an introduction.”

The high of his whirlwind weekend was soon soured by the sober reality of a two-match ban, which would have delayed Blackwell’s plans for giving Walton his full league debut on the opening day of the season against Derby County. Some creative administration from club secretary Ian Silvester ensured Walton was able to use youth and reserve team fixtures to serve his ban — “we got away with murder” — but Blackwell was eager to praise the “devil” in Walton’s personality afterwards.

“It certainly helped me then,” he says. “It hindered me as I got older. I think it certainly helped me progress at a younger age because I had no fear. I wasn’t big time and I wasn’t above my station, but I just said what I felt. I didn’t care whether you were 34 or my age at sixteen, it made no difference to me. I showed respect, don’t get me wrong, but I wasn’t in awe of anyone. At times it got me into trouble but at the same time it helped me play so many games at a young age.

“With regards to the devil in me, I just always wanted to win. I hated losing. I think it’s a family trait. I cared a lot and at times it boiled over. I eventually grew out of it, but it’s been with me throughout my career.

“It made a lot of national headlines, a sixteen year old scoring and getting sent off. I was still getting changed in the academy dressing room, I’d not been upgraded or allowed into the first team changing room at Thorp Arch at this point, so a lot of the younger lads had been in and stuck up various newspaper articles. It was nice, I enjoyed it.”

With his playing days now over, Walton is working with the next generation of young footballers, coaching at Eton, scouting for Chelsea’s academy and establishing his own business, Player Centre. So what advice would he give to a young player thrown into a similar whirlwind that he faced seventeen years ago?

“I’d say enjoy it. I say it to lads now, forget all the other stuff that people tell you about not getting carried away, blah blah blah. I spent years at the club that I love, walking around players that I’ve paid to watch and I’ve idolised over the years. You’ve got to enjoy that and make the most of it because there’s a lot of people who don’t get that opportunity unfortunately.

“You get younger players now who look like they’ve had a strop or have the weight of the world on their shoulders. It’s the best job in the world and I’ve said a million times that I count myself as one of the luckiest people alive, because I got to live my dream of playing for the club that I love. I’ve finished now and it still feels like two minutes ago I was that sixteen-year-old spotty, angry kid running around everywhere.” ◉