Beginning 2021 in the Premier League, where Leeds were desperate to be, means confronting the brutal mundanity of both the league and the times.

It’s a truism that the clubs with the best players will usually win, but the gap between best and rest now turns usually into almost always. The sporting effect is linked to the entertainment: nobody benefits when the Premier League is this predictable.

The question before United’s first visit to Tottenham’s new stadium was about how their inexperienced defence would cope with two of the best attacking players in the world, Harry Kane and Son Heung-min. The answer was not very well, and the result was 3-0. 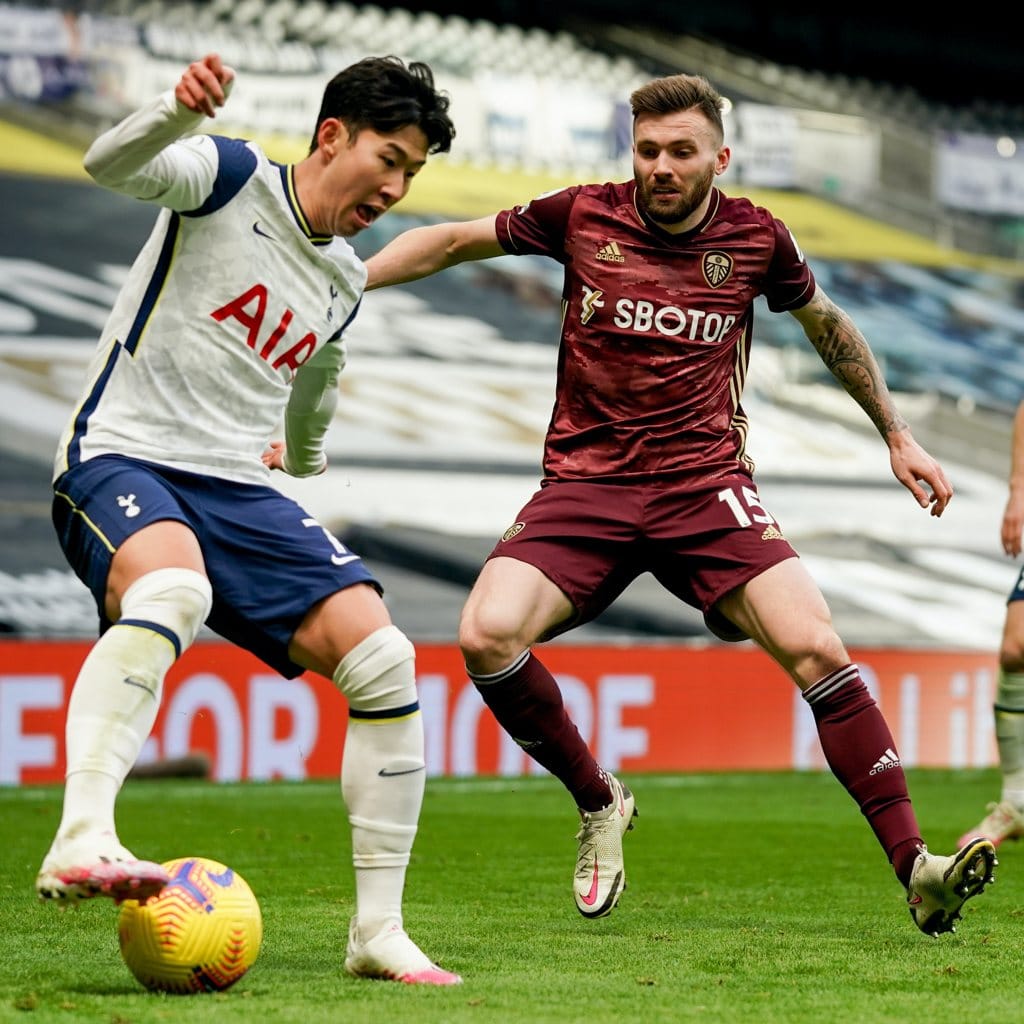 Leeds didn’t help themselves. The first goal was about Illan Meslier, passing straight to Harry Winks; Ezgjan Alioski, bringing down Steven Bergwijn; and the referees, deciding the foul was inside the penalty area. Kane’s only job was scoring the penalty.

The game felt very done at that point. If there was a chance of finding an opening in Jose Mourinho’s defence it was only likely to come once, not twice. Leeds set off in pursuit anyway, and had opportunities in a good spell before half-time; quick free-kicks were catching Spurs out, and passes behind Matt Doherty to Alioski and Jackie Harrison. But there was always space at the other end for Spurs.

Leeds are lauded for their dizzying positional play, full-backs setting each other up in the penalty area before racing back to mark one on one. But look at Spurs. Kane dropped deep, dragging Pascal Struijk out of defence and beating him. He crossed into the space Struijk left in the penalty area with such accuracy that Luke Ayling, the spare defender, was irrelevant. Son was there, the left-winger in the inside-right channel beating Stuart Dallas, the right-back watching him. Son put an unstoppable finish past Meslier. Compared to the full-pelt activity of Leeds United’s attacks, Kane and Son carried it out with a shrug.

Leeds’ dishevelled start to the second half meant Spurs soon had a third, a corner headed by Toby Alderweireld into Meslier’s diving grasp, then carried over the line. This was the unfortunate price of living for a goalkeeper; the situation could have looked better for Meslier had he not got so close to saving it. He stood up well to stop Kane adding more goals, but after the hour Spurs let Leeds have the ball, knowing their densely packed penalty area would give them few ways through.

Don Revie’s Leeds used to do this. With the game won, they’d switch off, saving energy for their congested fixture lists. The Elland Road crowd, wanting entertainment for their hard earned ticket money, would boo them, United getting a reputation in their own city for being a brilliant team that weren’t worth watching.

Nowadays stadiums are empty, but even when full fans put more emphasis on results and online bragging rights than enjoying the match in front of them. The final half hours of games like this — and there are many in the Premier League — are spent trying to think of other things. The Premier League is a brilliant league, but it’s often not worth watching.

That explains the headlines after this game. After ninety minutes of some good play by both teams, despite the tedium of the result, came the talking points. The things people say before adding, ‘As for the match itself.’ The attention after the match was on players who didn’t do anything in it: three from Spurs who broke coronavirus regulations at New Year, and for Leeds, Tyler Roberts and his unexplained absence from the bench. Never mind the football: what was the goss?

That’s when everyone got over the interlude of the match and back to talking about Leeds United’s tweet about Karen Carney. If Leeds couldn’t get past Kane and Son on the pitch, neither could they overcome this off it, and like the first goal, it was entirely self-inflicted. With newsrooms cut to skeleton staff who don’t have the resources for proper reporting, and pandemic restrictions forcing everyone behind screens anyway, news — in sport, in culture, in politics — has become about who tweeted what about who or what, news that gets tweeted to audiences whose irate reactions feed the next round of news about tweets. Leeds can only blame themselves for walking into that last week.

Leeds obviously felt Carney’s comments about being “promoted because of Covid” crossed a line. Andrea Radrizzani said as much, calling them “completely unnecessary and disrespectful”. Carney was wrong, and Leeds had the right to be annoyed, and the right to reply.

But did it have to be a tweet, though?

Gabby Agbonlahor got a tweet. So did Chris Wilder, among others. But those tweets involved sporting rivalries that Leeds didn’t have with Carney, a disinterested commentator filling airtime after a game. Agbonlahor and Wilder criticised Leeds, then Leeds beat their teams, and the LUFC Twitter account gloated. Gloating is part of the game — for fans, anyway — having the last laugh after winning the match. With Carney, but without any earlier rivalry, it didn’t feel like Leeds were having the final word; it felt like they were trying to start something.

Agbonlahor welcomes the pile ons, so he can scroll his mentions and quote tweet people he’s ‘rattled’. LUFC’s tweet to him included screenshots of his own tweets. But that was never Carney’s game. She based an opinion on bad info or no info while doing televised punditry; that happens. She wasn’t on a social media wind-up. LUFC, seeing tweets already flying, took their argument to social media first.

Did it have to be a tweet? Not, say, an email to the producers at Amazon, with whom Leeds after two documentaries have a working relationship? Or sending the relevant form tables to Carney via her agent, asking for her to do better next time, or even retract? If corrections had to be seen to be done, tweeting as much next morning when things had calmed down — ‘we’ve contacted Amazon and Karen Carney, who accept their mistakes’ — would have served. Maybe everyone involved could have synchronised their corrections and apologies, found some jokes to make about it. Leeds seem to have realised this eventually, inviting Carney to film a report at Thorp Arch, presumably about United’s fitness levels. By then it was a bit late.

Sexist abuse wasn’t only predictable, it was already happening before LUFC tweeted, meaning their tweet misplaced a veneer of endorsement upon people who will seize any chance to type abuse into the box on their phones. You can’t even tweet good things about female football pundits without abuse following. In fact, female pundits can’t even be on television without people tweeting that women have no place in football. Anyone on social media knows this.

This is where the point is about equality. Equality does not mean treating everybody the same, knowing different things will happen. Equality is about equal outcomes. If someone uses a wheelchair, it’s no good showing them to a staircase. For an equal outcome — getting everyone to the top floor — you need different actions. A lift for some people, stairs for others. That’s equality. Agbonlahor and Carney might have got similar tweets from LUFC. But the results were never going to be equal.

Leeds could have prepared for that. The most sophisticated corporate social media accounts have a voice in their replies. It’s embedded in their strategy: we will post this, trolls might say this or this, we will reply and shut them down like this. Leeds haven’t developed that far: they don’t reply. They drop the meme then leave. Imagine the defusing effect of the LUFC account, after criticising Carney’s comments, defending her from sexist abuse in the replies.

Or imagine not tweeting. The debate about the rights and wrongs of LUFC’s right-to-reply tweet has ignored the results. It did nobody any good, and it wasn’t worth it. I doubt anyone at Leeds feels good about it, and I have sympathy for them, too. But the same could be said of the Agbonlahor and Wilder tweets that built up to this one, when it all went wrong. Is this the voice Leeds United want for their corporate Twitter account? I saw several Liverpool tweets go viral over Christmas, of the players doing a virtual visit to a children’s hospital, inviting local community volunteers to unforgettable visits to Anfield. Leeds, meanwhile, have made international news for their part in a sexist Twitter pile-on; a month after, locally, Angus Kinnear was urgently clarifying the club’s own communications around season tickets and membership. And when it comes to research and facts, the story of the club’s founding on its own website wrongly claims Hilton Crowther was at Salem Chapel on the 17th October 1919. Crowther, and his plan of moving Huddersfield Town to Elland Road, didn’t come on the scene until November.

Memes are easy but communications are hard. And when the football year begins with a humdrum defeat in line with the form book and the transfer market, it’s a reminder that this is the Premier League in 2021, where attention wanders easily from the pitch to the timeline. Too easily, sure. But problems with social media need fixing, not adding to. ◉