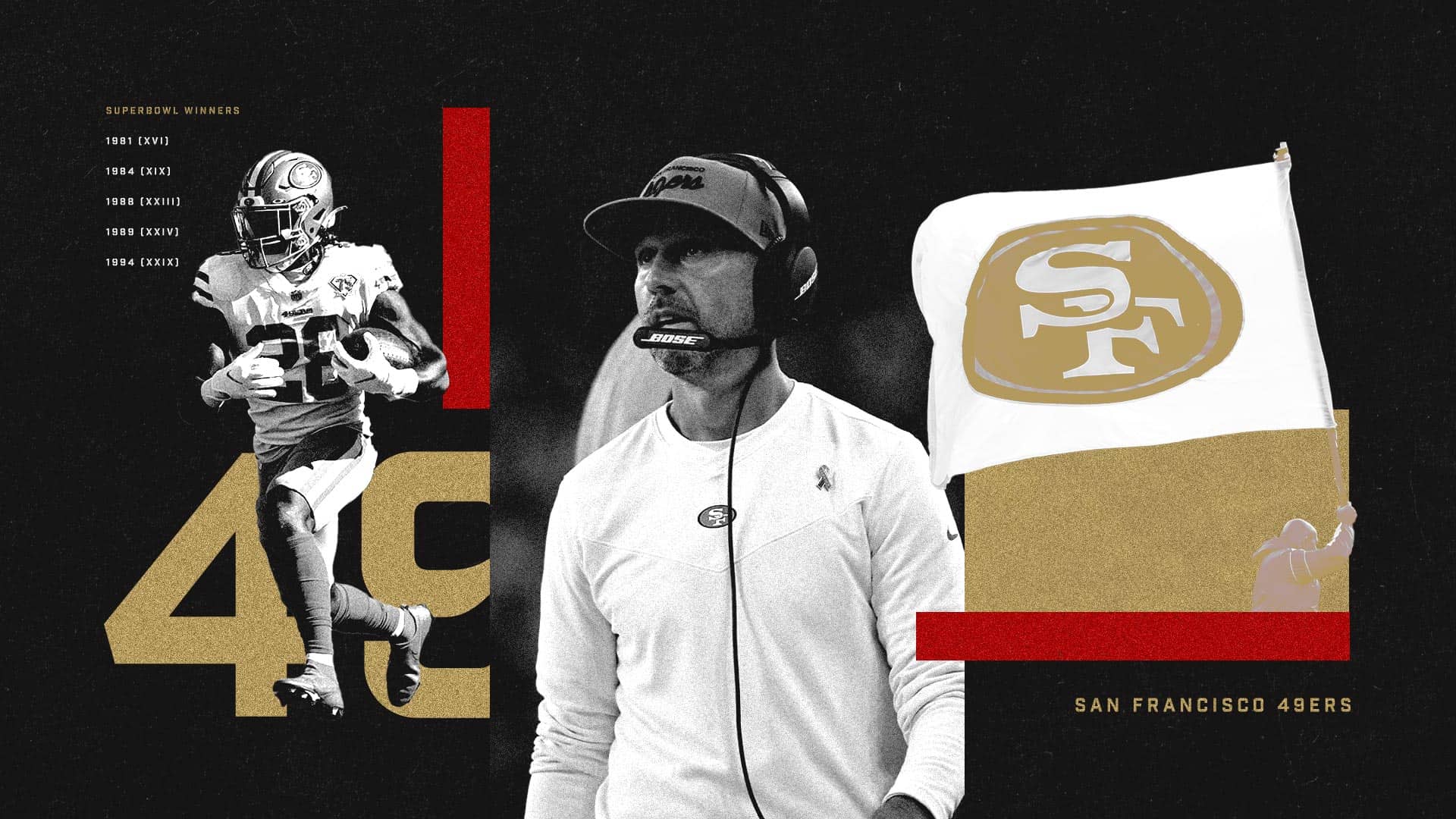 It’s a few weeks since we checked in with our San Franciscan kissing cousins, and already this weekend it was the vital regular season closer to decide whether they could play on in post-season with hopes of making the Super Bowl, or give up kind of sadly at the end of an indifferent campaign.

After we last looked, upon a frustrating defeat to Seattle Seahawks, the Niners got a topsy-turvy win over the Cincinnati Bengals, giving away a 20-6 lead in the fourth quarter but nicking it back by scoring 6-3 in overtime. Atlanta’s Falcons and Houston’s Texans (or Texas’ Houstons?) were crushed on the Levi’s Stadium Field of Jeans, 31-13 and 23-7, making what had become the second worst home record since 1970 a few weeks ago more bearable to the sun-dazzled Niners rooters dragging themselves forty miles away from their old pitch.

In between, though, was a daft 17-20 loss at Tennessee Titans two days before Christmas, meaning our brave Niners went into this weekend’s eighteenth and final round needing a win from their trip to the Los Angeles Rams to make the play-offs (it was their seventeenth game, odd numbers and byes happen, I don’t make the rules). If they lost, and the New Orleans Saints won their concurrent game at the Atlanta Falcons, it would be Saints not Niners taking the last wildcard play-off place. New Orleans set about doing exactly what they needed to, going 17-3 up at half-time, protecting that to win 30-20, meaning the pressure was on San Francisco in L.A. against the best team in NFC West.

Head coach Kyle Shanahan might have been regretting wearing a Leeds United hoodie the other week. Do not, and I repeat do not, look to LUFC sportswear to bring you luck. The half-time score was 17-3 to L.A. The Niners’s George Kittle, had predicted a physical battle in the press — “It’s going to be kind of a body-bag game,” he said, meaning exhausted players would be leaving in ’em — and was hearing a lot about that on the field from gleeful Rams. L.A. head coach Sean McVay was prancing about in the scoring zone to celebrate a touchdown with his players, skipping off when a ref grabbed and shoved him away.

TYLER HIGBEE IS BALLING OUT.

Shanahan, meanwhile, was watching every principle he has tried sticking to this season blowing up in his face. Much of his time has been spent fending off fans demanding to see cool young Trey Lance out there at quarterback instead of shambling old Jimmy Garoppolo, and he’d put faith in his chosen guy even after a good show by Lance last week, when Garoppolo was sidelined with a torn ligament in his right thumb. “Fuck, it hurts,” was Jimmy’s assessment as he tried to throw the ol’ pigskin during training for this match. Shanahan put him on painkillers and picked him for the big game anyway. Now the season was ending with a whimper and the post-match media sesh was feeling ominous.

If you can’t throw, run, and with my big fave Deebo Samuel on form, and running back Elijah Mitchell showing an uncanny ability to make little-guy sized gaps into big-guy caverns, the Niners overwhelmed the Rams into panic, racking up a 14-0 third quarter to put them level going into the fourth and final quarter. The pick of the scoring plays was done by giving the ball to Samuel, who tossed it into the endzone for Jauan Jennings, who juggled it a bit but not too much and scored. If Garoppolo’s thumb hurts, run and let Deebo throw it!

The Niners were steamrollering these Rams, who even when they got the ball looked like a team hitting themselves in the face, but I don’t know if our lads got too cocky or what. Garoppolo tried chucking a pass to Kittle, but Jalen Ramsey intercepted and ten plays later the Rams were ahead, the clock showing just over two and a half minutes left. Who says gridiron is a slow, boring game? Garoppolo and the Niners set about proving teams can play fast when they need to, and that the San Frannies aren’t about wilting under pressure. In the third quarter, for comparison, the Niners scored by going 74 yards upfield, doing twelve plays in a leisurely seven minutes. Now with seven plays they moved forward 83 yards in one minute and one second, 43 of them covered by what The Athletic’s Tim Kawakami thinks might have been ‘the best and boldest throw of Jimmy Garoppolo’s career’.

It wasn’t only play-off hopes on the line, or his fucking painful thumb; it was Trey Lance on the bench, ready to start a new era next season if Garoppolo couldn’t find a way to equalise and keep this one going. Jimmy’s answer was a 24-yard exocet into Deebo Samuel’s grasp, from the 49ers’ 38 yard line to the Rams’ forty, plus nineteen more yards gained as Deebo twisted like he does through all that Rams’ wool to their nineteen yard line. From there San Frantastic won a five yard penalty, missed a throw to Samuel, then broke through with 26 seconds left on the clock, Garoppolo finding Jennings in space to run the last few yards into the endzone, where he celebrated by rolling the ball away down an imaginary lane towards some make believe pins. Strike, for real!

Touchdown! It’s a draw! But gridiron doesn’t do draws! And that’s why the play-off picture got confusing to me, who doesn’t really know what these guys are doing in their helmets and pad, reading instructions written on their wrists. Because, despite New Orleans’ win in Atlanta, a tie was enough for the 49ers to make the play-offs, where the Rams already were. Only nobody had mentioned this before because they tend not to think about draws as a thing that can happen. But a draw would only be the final score if the two teams played through ten minutes of overtime without scoring. And the Rams still wanted to win so they’d be seeded for the play-offs. The Niners were on a tightrope: lose in overtime, and they were out, season over. Tie or win and they were safe.

No wonder the Francisco kids — backed by a decent away following, which bodes well for integrating with Leeds — cheered when they won the toss for first possession. Extra time rules are weird in gridiron: each team gets at least one chance with the ball, unless the first team scores a touchdown — that’s like a golden goal to end it. But score an actual goal, by kicking through the posts to take the lead, and the other team gets the ball and a chance to either equalise and give the first team the ball back, or win with their own sudden death touchdown. If nobody scores in ten minutes, or they both score the same number of field goals, it stays a draw. Got that?

Maybe it’s easier to explain what happened. After a careful, time-consuming, seven minute drive to prove they could still go slow, hedging to keep ball for a draw if they couldn’t score, the Niners got to a fourth down with no other choice but a 24 yard field goal attempt, scored by Robbie Gould. Now the season was all down to defending for less than three minutes. Either running the clock down or getting the ball back meant a Niners victory, and it turned out to take less than one minute. After seven frantic Ramalama plays in 53 seconds, L.A. quarterback Matthew Stafford aimed for Odell Beckham Jr out wide in the 49ers’ weak spot, but found the glory-grasping clutches of 22-year-old rookie cornerback Ambry Thomas. Now, Ambry is an interesting case. He skipped college football in 2020 rather than risk coronavirus. The 49ers drafted him last summer anyway but since then he hadn’t done much. The haters, they don’t like him. He only came into the team a month ago. This was the first interception of his career. And it was a great one. It won the game, it extended the season, it lifted a weight from Shanahan. Who knows, maybe it even cured Garoppolo’s thumb. “Three-deep, just had to do my job,” Ambry said. “See the ball, go get the ball.”

If there’s a recent Leeds United comparison, it’s imagining Charlie Taylor scoring a stoppage time goal on the final day of 2016/17 to get Garry Monk’s team into the play-offs. Chances of post-season success would have been about the same — the 49ers are 12/1 to get to the Super Bowl, 26/1 to win it — but it’s earned the 49ers some respite from calls to rip everything up, sack Shanahan, and start again. Admittedly, after missing the top six, Garry Monk’s flounce to Middlesbrough did Leeds no harm in the long run. But he didn’t have the support from Leeds’ then new owner, Andrea Radrizzani, that Shanahan has from the established regime in Santa Clara. Going by him miming the honk of a train horn in the exec seats, general manager John Lynch took this win as strategy confirming relief, so they can keep going with their plans into next season, whatever happens in the next few weeks. For now the 49ers face the Dallas Cowboys next weekend, three wins away from Super Bowl LVI, in a much better mood than they were with three minutes regulation time left in Los Angeles. Garoppolo ended the season a hero, and Kyle Shanahan spoke post-match with the ringing sound of a Leeds inspired note: “I’m just so proud of everyone in that locker room. They never stopped fighting.” ⬢