Set against a backdrop of ticker tape cascading from the cavernous stands of River Plate’s Estadio Monumental, amid a cacophony of noise, Argentina’s Daniel Passarella, ‘El Gran Capitan’, lifts aloft the 1978 World Cup. The result, in the minds of the players, was for the people, the ordinary people at a time when the ruling military junta under General Videla was inflicting a reign of terror on its citizens.

Such a triumph was also a means of showcasing a triumphant nation through the successful exploits of its national football team, but in doing so the reality of what was really going on was distorted; the reality of a brutal dictatorship. And this was never more graphically illustrated than in the absurdity of the location of the junta’s largest and most notorious death camp, the Navy Petty-Officers School of Mechanics, close to the stadium. Survivors, at that time imprisoned, chained and subjected to unimaginable cruelty, recalled the roar of the crowd as each goal was scored and then, later, at the final whistle, and as Passarella received football’s biggest prize. But the sound of triumphalism was regularly punctuated by the screams of ‘Los Desaparecidos’, or the disappeared. It is impossible to comprehend the cruelty meted out as the world’s eyes were directed towards the events taking place on a football pitch. 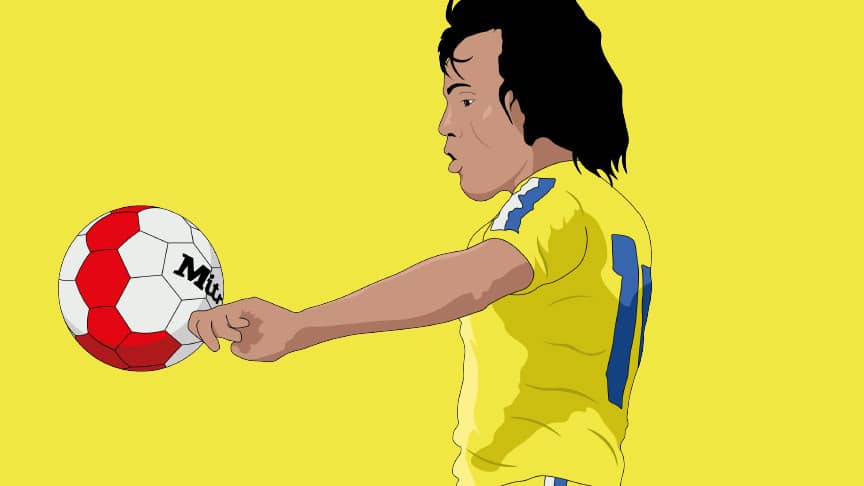 The Argentine team were relatively closeted from the plight of so many of their fellow citizens, but rumours still abounded about the consequences of an unsuccessful campaign. How would this manifest itself among a group of sportsmen? Many years later their success remains shrouded in controversy and has been the subject of much scrutiny. Much of the attention is directed towards Argentina’s dubious 6-0 win against a strong Peru side, who had only conceded five goals in their previous six World Cup games. Argentina needed to win by four clear goals to head the second round group table and make it through to the final, and by doing so eliminate Brazil. The result appeared to be no miracle, and more the consequence of the influence of the respective leaders of each nation: Bermudez of Peru, and Videla. Thirteen political prisoners from Peru were apparently sent to Argentina as part of the Condor Plan, through which Latin American dictatorships at that time cooperated in their attempts to suppress political dissidents. Once in the hands of the Argentine authorities the prisoners were tortured. It is now believed that Videla only accepted these prisoners if Peru agreed to ‘throw’ the game, such was the importance of presenting Argentina in a positive light on a global stage.

This was an Argentina, post Peron, in which freedom of speech was suppressed and left-wing political opponents, and their family members, of Jorge Videla would be ‘disappeared’ and incarcerated in the junta’s torture centres; up to 30,000 citizens are said to have disappeared during this time. The overthrowing of Isabel Martínez de Perón in the Cout d’etat of 1976 signalled the beginning of a dark period in Argentina’s history, and the team of 1978 have never been heralded in the same way Maradona’s 1986 World Cup winners were.

It was also the Argentina of a young Marcelo Bielsa and of Alejandro Sabella, both aged 23, and both eventually took a path to Elland Road, albeit 38 years apart. The similarities stretch beyond their association with Leeds, however. Both men came from similarly privileged backgrounds, both are considered academic, each highly principled with strong values and with a keen interest in politics. Although they had vastly differing careers on the field, both managed Argentina. Sabella certainly brought a maverick approach to his football as Bielsa has done to his management, on the training pitch and in the dugout. Their respective characters were most probably shaped by the events of this shameful period in Argentina’s history.

And so to Sabella and Leeds. As with many South American footballers Sabella was known by his nickname, or two nicknames in his case; ‘el mago’ or ‘the magician’ in reference to his ability on the ball. In addition, he acquired the rather unflattering, but equally endearing nickname of ‘la pa-chorra’ or ‘the sloth’ on account of his movement over the pitch. Pace certainly wasn’t his biggest ally, but his ability to think quickly was better; to think ahead and to pick a pass.

Sabella was signed by Jimmy Adamson for £400,000 in the summer of 1980 after a successful spell at Sheffield United, despite their relegation, after arriving in England during the summer of 1978, along with several other, more high profile Argentinians. The announcement of his signing initially appeased fans shorn of the mercurial Tony Currie, who had decided to return to London and QPR. Leeds under Adamson had had a relatively successful 1979/80 season, managing to qualify for the UEFA Cup as well as making it to the semi-final of the League Cup. But Adamson failed to recruit adequately during the summer of 1980 and players such as Allan Curtis, of whom much was expected, failed to deliver. An ageing Derek Parlane was no replacement for fans’ favourite Jon Hawley, and other signings appeared uninspired and, ultimately, proved unsuccessful. The likes of Kevin Hird, Gary Hamson, Jeff Chandler and Wayne Entwistle were the antithesis of Sabella in every respect; workmanlike and functional but lacking his class. Six defeats in the first seven games of the 1979/80 season ended with the sack for Adamson, replaced by Leeds legend Allan Clarke.

For Sabella, it was all over before it ever really began. He was was most probably the right player but at the wrong time during his brief spell at Leeds. As Brian Flynn recalls, “He was good enough to be a Leeds legend,” but Sabella wasn’t given the opportunity to establish himself. Flynn went on: “I really mean that. His technical skills, his balance and his running were — as far as I saw — exceptional. He had a magnificent left foot and a pretty complete game. Over four or five years he’d have grown into a star.”

If only the pragmatist in Allan Clarke could have built a team around him and looked to the long-term, rather than consider him a luxury a struggling team could ill afford yet, at the same time, craved. “We were struggling in the league,” says Flynn. “It’s that old story — in difficult times, you do what needs to be done. This isn’t a criticism of the manager [Clarke], but with him it was completely different to Jimmy Adamson. We became more defensive and our tactics were all about getting results — which in fairness was the right policy. For a time it worked. But someone like Alex wasn’t going to fit into that. When you’re in relegation battles, sublime skill tends to get lost.”

A midfield containing Brian Flynn and Byron Stevenson certainly lacked vision and creativity and wide players Carl Harris and Arthur Graham were also entrusted to provide the goals. But Clarke’s patience with the guile and craft Sabella provided for a limited side ended after a 1-0 defeat away to Norwich in January 1981. Sabella made only one substitute appearance thereafter and was banished to the reserves. He had only been given the opportunity to display his silky skills on 23 occasions, and that was that as far as his career at Elland Road was concerned.

Clarke cited the homesickness of Sabella‘s wife as the catalyst that ultimately led to him being transferred back to Argentina and a successful spell at Estudiantes de La Plata a year later. He went on to make eight appearances for the national side. Eddie Gray saw it differently. “He was a long way from home, but the bigger problem for him was the football we played at the time. The style we adopted wasn’t made for a lad with Alex’s ability.” The irony of Clarke’s short-sighted approach was that his team struggled to create chances, and although he guided Leeds to a 9th place finish, the fans were starved of goals; only 39 were scored, the fewest of any team in the division. Despite securing Leeds’ First Division status the football was turgid and Clarke inevitably took Leeds’ goal-shy team down the following season, with Peter Barnes the fall-guy, symptomatic of his failings in transfer market.

And what of Sabella, the man? He was born to a wealthy, upper middle-class family in a salubrious suburb of Buenos Aires. He excelled at school and was admitted to the Faculty of Law of he University of Buenos Aires before abandoning his studies to pursue a footballing career at River Plate. But he was very much shaped by his environment and, it can be assumed, the brutal dictatorship of Videla, where state control manifested itself in many unimaginable ways. A man of conscience, Sabella was politically active in the left-wing Peronist Youth and committed himself to aiding the marginalised communities of the urban poor in the sprawling ‘villa miseria’. He is quoted as stating, “We went on Saturdays to different poor neighborhoods and worked digging ditches for walls, sharing activities with the Peronist Youth and the rest of the popular movements.”

A poster of Argentina’s then democratically elected president Juan Perón, a populist who championed the rights of the poor, adorned his bedroom wall, and reading material included a collection of issues of the magazine El Descamisado (The Shirtless One), a publication of the revolutionary Montoneros, a socialist guerrilla group that sought to lead a Guevara-inspired revolution in Argentina. And in his own words, “I felt a growing need to be always on the side of solidarity and of the distribution of wealth for a fairer, more egalitarian society, in which we can all have equal opportunities.” But like so many young people at that time his political dreams were destroyed once Juan Peron died in 1974, and Videla’s coup of 1976 took away all hope of Sabella’s values being replicated politically.

Back to 2018 and Bielsa. There appears to something of the spirit of Sabella in Leeds’ new manager. A man for whom sound principles apply and belief in a system are all important. Intensity in everything his team does is critical to success. Sabella would no doubt approve of such an appointment and wish his compatriot well. Let’s hope he makes it beyond 23 games, certainly an unlucky number for Sabella. And not a good age to be in 1978. ◉